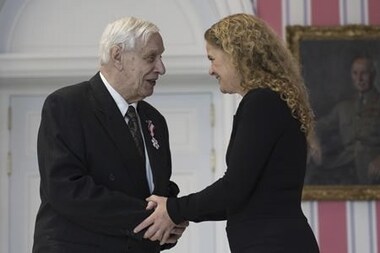 Walter Learning, a key figure in Canadian theatre, dies in Fredericton at age 81

FREDERICTON — Walter Learning, the founder of Theatre New Brunswick and a key figure in Canadian theatre, has died.

Learning, who was born in Quidi Vidi, N.L., died Sunday in Fredericton at the age of 81.

In a statement, Fredericton Playhouse executive director Tim Yerxa said that as a writer, director, actor and founder of Canada’s only full-time touring regional theatre company, Learning had a profound impact on countless people, organizations, and communities.

"His positive impact on the Canadian theatre sector is undeniable. It is evidenced in the organizations he led, the communities in which he lived and worked, and the countless individuals who came to know him as colleague, mentor, and friend," Yerxa said.

"Throughout his illustrious life, Mr. Learning worked tirelessly to promote the value of professional theatre for New Brunswickers. He believed it was every New Brunswicker's birthright to have access to a rich and varied cultural life," he said.

Among his many roles, Learning served on the Canada Council for the Arts, and as artistic director of the Vancouver Playhouse and later the Charlottetown Festival.

Adam Brazier, the current artistic director of the performing arts at the Confederation Centre in Charlottetown issued a statement of condolence.

"Walter spent a career and a lifetime dedicated to artists and to theatre," Brazier wrote. He noted that Learning's five years with the Charlottetown Festival included "leading the production and development of dozens of plays and musicals, including Anne of Green Gables: The Musical and its international touring to Japan in 1991."

In recent years, Learning spent much of his time as a freelance broadcaster, writer, actor and director.

In 2018, he was made a member of the Order of New Brunswick, and in June 2019 was appointed to the Order of Canada.

The statement read during the Order of Canada ceremony described Learning's many contributions.

"Newfoundlander Walter Learning has cultivated excellence in theatre across Canada.... His body of work as a director, actor and writer has been seen from coast to coast, and his ongoing involvement in the field has nurtured the blossoming talent of many young thespians."

Learning is survived by his wife, Ruthie, and son, Warwick.

This report by The Canadian Press was first published Jan 7, 2020.

What to do during a funeral procession
See all