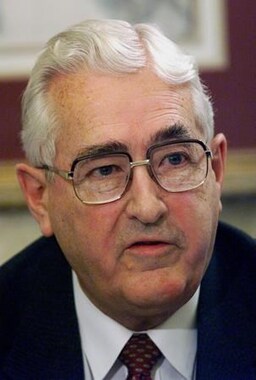 VICTORIA — Ted Hughes, whose reports led to the resignation of a premier and the overhaul of child welfare systems in British Columbia and Manitoba, has died. He was 92.

Hughes was B.C.'s first conflict of interest commissioner and his reviews of the child welfare systems after the deaths of Sherry Charlie in B.C. and Phoenix Sinclair in Manitoba prompted change.

Victoria Gray, B.C.'s conflict of interest commissioner, said Hughes will be remembered for his compassion, determination and clarity of thought.

She said Hughes, who died Friday in Victoria, leaves a legacy that includes stronger ethical constraints on politicians and the establishment of an independent office in B.C. representing children and youth.

"He was a giant," Gray said in an interview on Monday. "I think there is no other way to say it. Absolutely, he's a role model for anyone in the conflict of interest world."

In a statement, he said Hughes led investigations into challenging cases and issues etched in B.C. history, adding that he "held powerful people accountable."

His 1991 conflict investigation report into Bill Vander Zalm's sale of his private Fantasy Gardens home to a billionaire Taiwanese businessman resulted in the B.C. premier's resignation.

Hughes served as conflict of interest commissioner from 1990 to 1997, but his lengthy career also included service as a lawyer, judge and senior civil servant.

Former B.C. children's representative Mary Ellen Turpel-Lafond said she applied for the position after reading a 2006 report by Hughes calling for stability in the child welfare system.

Turpel-Lafond said she had been serving as a provincial court judge in Saskatchewan when the report was released.

"I read it and I said, 'Yes, this is the best report I've ever seen, and if this has a remote chance of happening we're going to make some very significant progress in a system that has been stuck for a very long time,' " she said. "It certainly enticed me to come out to B.C. to be the inaugural representative and do it for a decade."

His report on the 2002 death of Sherry Charlie in Port Alberni was the catalyst for the changes in B.C. as Hughes examined the government's child welfare system during a period of budget cuts.

"I'm disheartened by the rate of suicide among young Aboriginal people and the ever-increasing numbers of Aboriginal children being taken into care," the report said.

After his 2014 report on Phoenix Sinclair, the Manitoba government acknowledged the failure of the child welfare system to protect the girl and pledged to act immediately on the recommendations made by Hughes.

Turpel-Lafond said she stayed in contact with Hughes, who encouraged her to be vigilante about the independence of her office. She said he supported her decision to sue the former the Liberal government and premier Gordon Campbell to receive access to government child protection documents.

"Ted went to court with me," she said. "He sat there on the day the verdict came. He was supportive, but he supported the principle. He didn't support you blindly."

This report by The Canadian Press was first published Jan. 20, 2020.