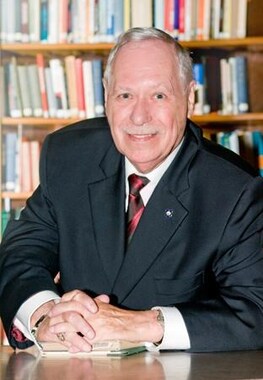 The province's premier paid tribute to Pichette, who spent decades as a provincial and federal civil servant before moving on to a career as a journalist and author.

Political scientist Roger Ouellette, a friend of Pichette, said he passed away in Moncton after being diagnosed with lung cancer three weeks ago. "It was really fast, but he was prepared for that," said Ouellette, a University of Moncton professor.

Pichette's role in creating New Brunswick's flag was a novel one.

Parliament had just introduced the Canadian flag in 1965, replacing the Red Ensign that had a Union Jack in the corner. With provincial flags a relatively new concept, there was word the Progressive Conservative opposition in New Brunswick wanted to present a motion to adopt a variation on the old Red Ensign — problematic in a province with a French-English divide.

Then-premier Louis Robichaud, the first Acadian premier, tasked a young staffer in his office with secretly designing a different flag before the province could descend into debate.

Pichette, who had training in heraldry, created a flag that was universally accepted by the political class and avoided the conflict that had accompanied the creation of the Canadian flag in Ottawa.

Aside from helping to create New Brunswick's flag in 1965 while serving as a political assistant in Robichaud's office, he was also later part of a group that drafted the province's Official Languages Act, establishing New Brunswick as the country's only officially bilingual province.

As the province's first director of cultural affairs, Pichette's passion for the arts led to the establishment of the New Brunswick Art Bank in 1968.

Pichette would move on to work for the federal government as an Atlantic representative for the Commissioner of Official Languages before retiring from the civil service and starting a second career.

Fluently bilingual, Pichette was a journalist for the Telegraph-Journal in New Brunswick, the first editor of L'Acadie Nouvelle and a columnist for The Globe and Mail.

Born in Edmundston, N.B., Pichette was also the author of several books on Acadian and New Brunswick history and worked as a translator and editor.

"He was very curious, he was a big reader," Ouellette said.

Premier Blaine Higgs paid tribute to Pichette as an "iconic New Brunswicker." Writing on Facebook Thursday night, he said Pichette helped shape the cultural and linguistic fabric of the province.

"It's clear that his dedication to our province was second to none," Higgs wrote.

Liberal Leader Kevin Vickers said in a statement he was saddened by the passing of Pichette, "a proud, passionate Acadian and a great New Brunswicker, who gave much to his province and its people." Pichette leaves "a lasting legacy that we can all be proud of," Vickers said.

This report by The Canadian Press was first published Oct. 25, 2019.

- By Sidhartha Banerjee in Montreal.

TORONTO — Barrick Gold Corp.'s visionary founder Peter Munk, a man of lofty global ambitions who fulfilled them like few others, died Wednesday at...

ATLANTA — Former U.S. Sen. Zell Miller, a lifelong Democrat and the father of Georgia's lottery-funded HOPE scholarship while serving as governor, died Friday. He was...