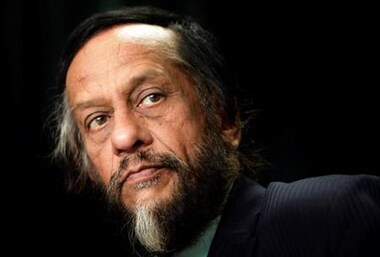 Pachauri’s death was announced late Thursday by The Energy and Resources Institute, or TERI, a research group he headed until 2016 in New Delhi.

He chaired the Intergovernmental Panel on Climate Change panel from 2002 until he resigned in 2015 after an employee at his research firm accused him of sexual harassment.

The IPCC and former U.S. Vice-President Al Gore were awarded the 2007 peace prize for their efforts to expand knowledge about man-made climate change and lay the foundations for counteracting it, the Nobel committee said in its award.

Pachauri had undergone surgery in a New Delhi hospital earlier this week. He died at his home on Thursday, the Press Trust of India reported.

Pachauri won civilian awards from India's government in 2001 and 2008.

"His leadership of the Intergovernmental Panel on Climate Change (IPCC) laid the ground for climate change conversations today," Desai said in a statement.

The allegations against Pachauri included claims that he sent suggestive text messages, emails and WhatsApp messages harassing a 29-year-old female employee in his organization.

Pachauri had denied the charges and his attorneys claimed that his messages were hacked in an attempt to malign him. New Delhi police filed a complaint in court, but the trial could not be completed.

Professor Jean-Pascal van Ypersele, IPCC vice chairman from 2002-2015, said coming from a developing country, Pachauri should be credited for drawing the attention, long before others, to the importance of finding synergies between climate policies and sustainable developing agenda.

"Unfortunately, he was sometimes overconfident as when he refused to quickly acknowledge and correct the insignificant error that had been present in an IPCC report. This led to escalated and undue criticism of the organization he chaired,’’ he tweeted.

He is survived by his wife, a son and a daughter.