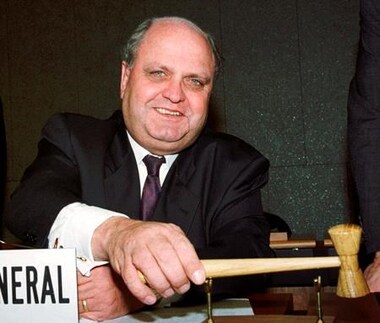 WELLINGTON, New Zealand — Mike Moore, who served as New Zealand's Prime Minister before leading the World Trade Organization during a tumultuous time when thousands protested in Seattle riots, died early Sunday. He was 71.

He died at his home in Auckland, his wife Yvonne Moore said. He'd suffered a number of health complications since having a stroke five years ago.

Moore was an advocate for both advancing the rights of blue-collar workers and for expanding international trade, a combination which, to some, seemed at odds with itself. Although he had a long political career in New Zealand, Moore's tenure as prime minister was brief: just two months in 1990 before he was defeated in an election.

He served as the third director-general of the WTO from 1999 until 2002, overseeing an expansion in the organization including China's entry into the rules-based trading system. He later served five years as New Zealand's ambassador to the U.S.

“The world lost a man with a huge intellect, and huge heart today," Ardern said.

Yvonne Moore said Moore had an ability to connect with people from all walks of life after he left school at age 15 to take a job at a slaughterhouse.

“He was stubborn, optimistic, generous and kind,” she said in a statement.

Moore believed his love of reading and hard work would overcome his lack of formal education, his widow said. By age 16 he'd joined the liberal Labour Party and at age 23 became New Zealand's youngest serving politician. He lost his seat his seat in the following election but was reelected in 1978.

He became known as a fighter for workers' rights and for ordinary New Zealanders. He held a number of portfolios before his brief tenure as prime minister. After his election defeat in 1990, he became opposition leader for three years before Helen Clark took over the role.

When Moore became director-general of the WTO in 1999 it was the highest international role ever held by a New Zealander.

He believed that expanding international trade would benefit people around the world, but many people were becoming worried that trade liberalization was degrading conditions for workers and creating other problems.

The “Battle in Seattle” in 1999 overshadowed Moore's tenure at the WTO. Tens of thousands of people took to the streets to protest WTO meetings in the city. Well-organized protest leaders managed to temporarily shut down some meetings and Seattle declared a state of emergency, with police using tear gas and pepper spray against the crowds.

“Never before had open trade within a rules-based system done so much to lift living standards and increase opportunity; yet never before had the persistence of poverty and exclusion been so glaring,” Moore later said. “In Seattle, the intersection of these interests became the site of a major pile-up, a collision, a clash of priorities and imperatives.”

Moore was known for his wit: “Much has been written about Seattle," he would say. “Some of it is even true.”

Moore estimated that the Seattle riots set back the rise in global trade by a couple of years. Others said it was a decade. And the arguments about the benefits and drawbacks of global trade continue today, as evidenced by tensions between the U.S. and China, Europe and Britain.

Moore was in 1999 awarded his country's highest honour, the Order of New Zealand.

Deputy Prime Minister Winston Peters said Moore would be remembered as one of the great New Zealanders, a man who was warm, passionate, funny, and mischievous.