BACK
Beyond the Dash
×
In this Oct. 24, 2016 file photo, Northern Ireland's deputy First minister Martin McGuinness arrives to Downing Street, for a meeting with Britain's Prime Minister Theresa May, and the Brexit Secretary David Davies about Britain's decision to leave the EU in London. McGuinness, the Irish Republican Army warlord who led his underground, paramilitary movement toward reconciliation with Britain, and was Northern Ireland's deputy first minister for a decade in a power-sharing government, has died, his Sinn Fein party announced Tuesday, March 21, 2017, on Twitter. He was 66. (AP Photo/Alastair Grant, File) 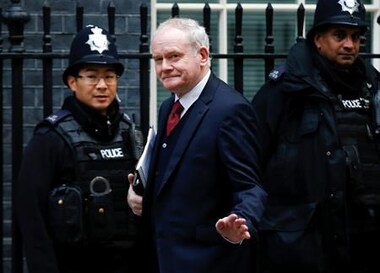 DUBLIN — Martin McGuinness took up arms to fight British soldiers in the streets but ended up shaking hands with Queen Elizabeth II. A militant who long sought to unify Ireland through violence, he became a peacemaking politician who earned the respect, and even the friendship, of his former enemies.

McGuinness, who died Tuesday at 66, was an Irish Republican Army commander who led the paramilitary movement toward reconciliation with Britain and went on to serve as Northern Ireland's deputy first minister for a decade in a Catholic-Protestant power-sharing unity government.

Former British Prime Minister Tony Blair, who worked with McGuinness to forge Northern Ireland's 1998 peace accord, said "there will be some who cannot forget the bitter legacy of the war. And for those who lost loved ones in it, that is completely understandable."

"But for those of us able finally to bring about the Northern Ireland peace agreement, we know we could never have done it without Martin's leadership, courage and quiet insistence that the past should not define the future," Blair said.

McGuinness' Sinn Fein party said he died in a hospital in his hometown of Londonderry following a short illness.

McGuinness suffered from amyloidosis, a rare disease with a strain specific to Ireland's northwest. The chemotherapy required to combat the formation of organ-choking protein deposits sapped him of his strength and forced the once-indefatigable politician to start missing government appointments. He stepped down from front-line politics in January.

Sinn Fein leader Gerry Adams said McGuinness was "a passionate republican who worked tirelessly for peace and reconciliation and for the re-unification of his country."

Irish Prime Minister Enda Kenny said McGuinness "will always be remembered for the remarkable political journey that he undertook in his lifetime. Not only did Martin come to believe that peace must prevail, he committed himself to working tirelessly to that end."

But some who suffered at the hands of the IRA could not forgive.

Former British government minister Norman Tebbit, whose wife was paralyzed by an IRA bombing of a Brighton hotel in 1984, said he hoped that McGuinness was "parked in a particularly hot and unpleasant corner of hell for the rest of eternity."

McGuinness' transformation into a peacemaker was remarkable. As a senior IRA commander during the years of gravest Catholic-Protestant violence, he insisted that Northern Ireland must be forced out of the United Kingdom against the wishes of Protestants in Northern Ireland.

"We don't believe that winning elections and any amount of votes will bring freedom in Ireland," he told the BBC in 1986. "At the end of the day, it will be the cutting edge of the IRA that will bring freedom."

Yet within a few years of making that stubborn vow, McGuinness was involved in covert contacts with British intelligence that led eventually to a truce, inter-party talks and the installation of the IRA icon in the heart of Northern Ireland's government.

Irish Times columnist Fintan O'Toole argued in January 2017 that McGuinness had been "a mass killer — during his period of membership and leadership the IRA killed 1,781 people, including 644 civilians — whose personal amiability has been essential to the peace process."

"If he were not a ruthless and unrepentant exponent of violence, he would never have become such a key figure in bringing violence to an end," O'Toole said.

Unlike his close ally Adams, McGuinness never hid the fact that he had been a commander of the IRA — classed as a terrorist organization by the British, Irish and U.S. governments. Nor could he.

Born on May 23, 1950, he joined the breakaway Provisional IRA faction in his native Londonderry — simply Derry to Irish nationalists — after dropping out of high school and working as an apprentice butcher in the late 1960s. At the time, the Catholic civil rights movement faced increasing conflict with the province's Protestant government and police.

McGuinness appeared unmasked at early Provisional IRA press conferences. The BBC filmed him walking through the Bogside discussing how the IRA command structure worked and stressing his concern to minimize civilian casualties, an early sign of public relations savvy.

In 1972, during Northern Ireland's bloodiest year, McGuinness joined Adams in a six-man IRA delegation flown by the British government to London for secret face-to-face negotiations during a brief truce. Those talks went nowhere. McGuinness went back on the run until his arrest in the Republic of Ireland near a car loaded with 250 pounds (110 kilograms) of explosives and 4,750 rounds of ammunition.

During one of his two Dublin trials for IRA membership, McGuinness declared from the dock he was "a member of the Derry Brigade of the IRA and I'm very, very proud of it."

Historians and security analysts agree that McGuinness was promoted to the IRA's ruling army council following his November 1974 parole from prison and would have overseen many of the group's most spectacular and divisive attacks. These included bomb attacks on London tourist spots and the use of "human bombs" — civilian employees like cooks and cleaners at British security installations — who were forced to drive car bombs to their places of work that were detonated by remote control before they could raise the alarm.

His central role in the IRA command was underscored when Britain in 1990 opened secret dialogue with the underground group. An MI6 agent codenamed "The Mountain Climber" met McGuinness several times as part of diplomatic efforts that delivered a 1994 IRA truce and, ultimately, the U.S.-brokered Good Friday peace accord of 1998.

Northern Ireland's first power-sharing government, formed in 1999, was led by moderates and afforded only minor roles for Sinn Fein and the most uncompromising Protestant party, Ian Paisley's Democratic Unionists.

That first coalition collapsed under the twin weight of Paisley-led obstruction and the IRA's refusal to disarm. McGuinness served as the lead liaison with disarmament officials.

After election results vaulted the Democratic Unionists and Sinn Fein to the top of their communities for the first time, pressure mounted on the IRA to surrender its stockpiled arsenal. This happened in 2005, paving the way for Paisley to bury the hatchet with the group he called "the Sinners."

No observer could have foreseen what happened next: a genuine friendship between First Minister Paisley and Deputy First Minister McGuinness. Belfast wits dubbed them "The Chuckle Brothers" because of their public warmth.

When Paisley died in 2014, an emotional McGuiness hailed him as a champion of peace.

"Past history shows that we were political opponents, but on this day I think I can say without fear of contradiction that I have lost a friend," he said.

McGuinness maintained more businesslike relations with Paisley's frosty successor, Peter Robinson. In 2012, when Queen Elizabeth II visited Belfast, the monarch and the former militant shook hands — a gesture that would have seemed impossible just years before.

All the while, McGuinness expressed newfound support for the police as they faced attacks from IRA splinter groups — a U-turn that exposed McGuinness and his relatives to death threats.

More recently, Northern Ireland's power-sharing government tottered amid a scandal over a bungled green energy program. When a frail-looking McGuinness resigned in January, the administration collapsed, triggering an early election in March that has plunged the future of Northern Ireland power-sharing into uncertainty.

Days later, McGuinness resigned from politics, saying it was time for a new generation of republican leaders to take charge.

"We are on a journey to unite our people and unite our island," he said. "As a Sinn Fein activist I will continue to play a full and enthusiastic part in that essential process of building bridges, of dialogue and of reconciliation between our still divided people."

McGuinness is survived by his wife, Bernadette, two daughters and two sons. 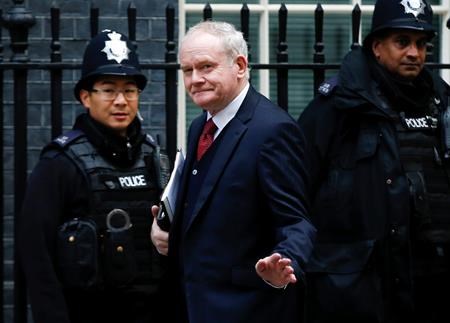