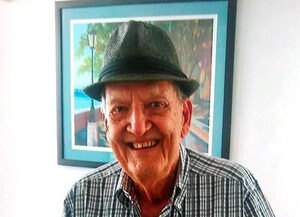 NEW YORK — Luis Rigoberto Varela, who worked nearly 40 years as a correspondent for the now defunct Spanish desk of The Associated Press in Puerto Rico and covered five Olympics and numerous international sports events, has died. He was 82.

His son told the AP that Varela died late Tuesday at a hospital in Ponce, a southern coastal city in Puerto Rico, after facing complications from a June 11 intestinal surgery.

Varela left his native Cuba in 1958 and settled in Puerto Rico, where he started a nearly six-decade career in journalism. His specialty was sports, particularly baseball, track and field, basketball and volleyball. He also had a program — Sports Trench — on the Catholic Radio station.

He served as a mentor to AP colleagues in Puerto Rico and around the region.

“I never saw someone so passionate about their profession. He lived for journalism,” said Pablo Elías Giussani, former editor of the AP’s Spanish service. “He was a sports encyclopedia.”

He received several recognitions for his work and was admitted into the Puerto Rico Sports Hall of Fame in 2010.

“He had great prestige,” said former AP colleague Sergio Carrasco. “Athletes and managers would often call him to give him an exclusive.”

Varela is survived by his wife, María, with whom he was married 57 years, three children and four grandchildren.