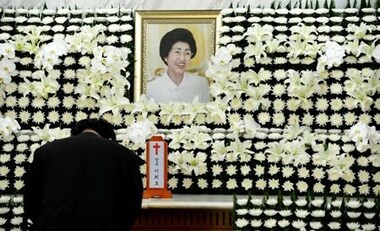 SEOUL, Korea, Republic Of — Lee Hee-ho, a South Korean feminist activist who fought for democracy against dictatorships alongside her husband and future President Kim Dae-jung, has died. She was 97.

Lee, a devout Christian, left a will saying that she would pray for South Korea's people and a peaceful unification with North Korea in heaven, according to Park Han-shik, an official from the Kim Dae Jung Peace Center. Park said Lee died Monday.

South Korean President Moon Jae-in tweeted that the country has lost a "great person" who devoted her life to women and democracy.

Born in the Seoul in 1921, Lee following her college graduation and studies in the United States began actively campaigning for women's rights in the 1950s, establishing activist and research groups and serving a senior role with South Korea's YWCA.

She married Kim in 1962 when he was a dissident politician. Kim, who died in 2009, survived a death sentence and an assassination attempt by dictators before winning the presidency in 1997.

Kim won the Nobel Peace Prize in 2000 for his pro-democracy struggle and his rapprochement policies with North Korea, months after he met then-North Korean leader Kim Jong Il in Pyongyang for the first summit between the Koreas since their 1950-53 war.

North Korea sent a high-level delegation to the South after Kim Dae-jung died in 2009.

There's speculation the North may send another delegation to mourn Lee's death although diplomatic activity between the Koreas has halted since a February summit between current North Korean leader Kim Jong Un and President Donald Trump collapsed over disagreements over exchanging sanctions relief for nuclear disarmament.

An official from Seoul's Unification Ministry, which deals with affairs with North Korea, said that the North had not expressed a desire to send a delegation as of Tuesday morning and that it was unclear whether the country would. The official spoke on condition of anonymity, citing office rules.

Lee had joined her husband's 2000 trip to Pyongyang for a summit and also visited the North Korean capital in 2011 after the death of Kim Jong Il.

She is survived by her two sons. 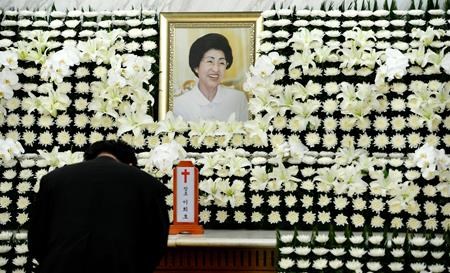