BACK
Beyond the Dash
×
Ken Taylor, Canadian Ambassador to Iran, laughs as he answers questions during a meeting with journalists outside the Canadian Embassy in Paris in this Jan. 31, 1980 file photo. Taylor, who sheltered six U.S. citizens during the 1979 Iranian hostage crisis, has died, says a family friend. THE CANADIAN PRESS/AP 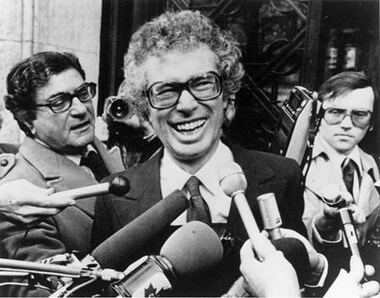 OTTAWA — Ken Taylor, whose role in the 1979 "Canadian Caper" made him a hero on both sides of the border for helping shelter six U.S. citizens at the height of the 1979 Iranian hostage crisis, has died. He was 81.

His exploits in Tehran at the time were the basis for the blockbuster 2012 Hollywood film "Argo," which resurrected the crisis for a whole new generation — even if it was criticized for understating Canada's part in the drama.

"I was sitting here crying, if you can believe it — I'm an old guy who doesn't cry, and I was crying," Lean said when contacted by The Canadian Press.

"Those of us who know him lost a friend, but Canadians lost a true hero who just lived life to the fullest and I got lucky enough to be allowed to tag along with Taylor."

Taylor's wife, Pat, was by his side when he died, said Lean. Taylor is also survived by his son, Douglas, and his wife Dana and two grandchildren.

Born in 1934 in Calgary, Taylor was heralded as a hero for helping save the Americans — a clandestine operation that had the full support of Joe Clark's short-lived Progressive Conservative government.

Taylor didn't initially want his friends and family making a fuss about his health, his son Douglas said, although eventually he came to terms with his fate and warmed to the idea of having them visit him in hospital.

"At the end, he came to an acceptance of the time frame that was left, and really for him what was most important for him were obviously his family and his friends," the younger Taylor said.

"So a lot of them came down over the past week or so, and he had an anecdote about each and every one of them and it was really quite amazing — he had a great clarity of mind and sense of humour. Right up until the end, until yesterday."

Tributes poured in as news of Taylor's passing spread.

U.S. ambassador Bruce Heyman hailed his "valour and ingenuity" in harbouring the six Americans, an act of bravery for which he was awarded the Congressional Gold Medal.

"Ambassador Taylor's courageous actions exemplify the enduring nature of the special relationship between the United States and Canada."

"As ambassador to Iran in 1979, Mr. Taylor acted with great heroism to protect the lives of American hostages," Harper said. "His memory will live on in the annals of Canadian diplomacy."

But Taylor disagreed with the Harper government's decision to close Canada's embassy in Tehran in 2012 and sever diplomatic relations with Iran.

Taylor said Canada closed its eyes and ears to a country that needed monitoring: "As a diplomat," he said, "I think you never give up."

Taylor's wife Pat said her husband's legacy would be his generosity.

"He did all sorts of things for everyone without any expectation of something coming back," she told The Associated Press in a telephone interview.

"It's why that incident in Iran happened," she said. "There was no second thought about it. He just went ahead and did it. His legacy is that giving is what is important, not receiving. With all his friends that's what he did."

Those 1979 exploits — a high-stakes political drama with life-and-death implications — later became the subject of the film "Argo."

Taylor made headlines when he complained about how Canada's role in the crisis was minimized in Ben Affleck's Oscar-winning thriller about the hostage-rescue exploits of CIA agent Tony Mendez.

Affleck set the record straight, saying the CIA operation would not have succeeded without the help of Taylor and his fellow Canadians.

"There were folks who didn't want to stick their necks out and the Canadians did," Affleck told a Toronto International Film Festival press conference.

"They said, 'We'll risk ourselves, our diplomatic standing, our lives to harbour these six Americans that we owe nothing to and just because it's the moral, right thing to do.'"

Malcolm McKechnie, a former ambassador to Spain who worked with Taylor at the consul in New York, said his friend didn't want the credit, but rather he simply wanted his country to be recognized for its role.

"He said Canada deserves to be recognized for the role that Canada played in the escape of the hostages; he always put it in that context," McKechnie said.

"It was a Canadian, and he happened to be the ambassador who did it for Canada, but he did it with the full support of the Canadian government at the time."

Obituaries piled up in American media as CNN, National Public Radio and other U.S. outlets reported on his death.

"Saddened by passing of Ken Taylor, who protected 6 Americans in Iran in 1979," tweeted U.S. Secretary of State John Kerry.

In 2013, Taylor's story was told once more for posterity at the Toronto International Film Festival, which debuted the documentary, "Our Man in Tehran."

Lean told the story of how he and Taylor became friends in the 1982 through Peter Pocklington, then-owner of the NHL's Edmonton Oilers, and Glen Sather, at the time the team's head coach and later general manager.

"Sather and I got to spend an hour with Ken on Monday reminiscing in the hospital," said Lean.

"He was in and out of consciousness. He knew it was game over. It was only a matter of time. But there was no complaint. Pat was sitting with him. He talked to us about his grandchildren. They were his pride and joy, his two grandchildren. "

— With files from Cassandra Szklarski in Toronto