BACK
Beyond the Dash
×
In this May 8, 2006 file photo, Knopf editor Judith Jones delivers her acceptance speech after she received the lifetime achievement award during the 2006 James Beard Foundation Awards ceremony, in New York. Jones died of complications from Alzheimer's on Wednesday, Aug. 2, 2017, at her summer home in Walden, Vt. She was 93. (AP Photo Richard Drew, File) 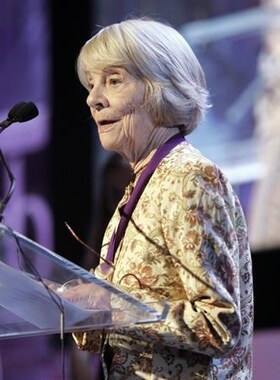 NEW YORK — Judith Jones, a consummate literary editor who helped revolutionize American cuisine by publishing Julia Child and other groundbreaking cookbook authors, worked for decades with John Updike and Anne Tyler and helped introduce English-language readers to "The Diary of Anne Frank," has died at age 93.

Jones, who spent more than 50 years at Alfred A. Knopf before retiring in 2011, died early Wednesday at her summer home in Walden, Vermont. Her stepdaughter, Bronwyn Dunne, said she died of complications from Alzheimer's.

Few better embodied and lived out the ideal of a life in New York publishing than the slender, refined Jones, whom Tyler once praised, both a person and as an editor, as "very delicate and graceful, almost weightless." Jones worked at one of the leading publishing houses with some of the world's most beloved authors. She thrived even as Knopf evolved from a family-run business to part of the international conglomerate Bertelsmann AG.

Moviegoers would learn about her in "Julie & Julia," the 2009 film starring Meryl Streep as Child and featuring Erin Dilly as Jones. In the early '60s, she signed up the then-unknown Child and "Mastering the Art of French Cooking," a landmark release that caught on again decades later thanks to "Julie & Julia." Tyler, however, thought the movie "stupid" because of a scene in which Jones backs out of a dinner at an author's home because it's raining, something the real editor would never have done.

In an email Wednesday, Tyler wrote that Jones "was both an astute and gifted editor and a remarkable human being."

Jones was herself an author and gourmet who collaborated on several cookbooks with her husband Evan Jones, contributed to numerous food magazines and wrote the memoir "The Tenth Muse: My Life in Food," published in 2007. The year before, she received the James Beard Foundation Lifetime Achievement Award, a fitting prize for Jones, who published Beard and was a close friend.

Jones' husband died in 1996. They had two children and two stepchildren. In recent years, she kept a blog, judithjonescooks.com, and wrote the book "The Pleasures of Cooking for One."

The daughter of an attorney, Jones was born Judith Bailey in 1924 and grew up in Manhattan. She majored in English at Bennington College, worked as an editorial assistant at Doubleday and by her early 20s was a reader for Doubleday in Paris. Among her early achievements was finding a masterpiece amid the rejects: "The Diary of Anne Frank," which had been published in Europe.

"One day my boss said, 'Oh, will you get rid of these books and write some letters,'" she explained in a 2001 interview with The Associated Press.

"I curled up with one or two books. I was just curious. I think it was the face on the cover. I looked at that face and I started reading that book and I didn't stop all afternoon. I was in tears when my boss came back. I said, 'This book is going to New York and has got to be published.' And he said, 'What? That book by that kid?!'"

Jones joined Knopf in 1957 as a reader of French translations. The company, run by founders Alfred and Blanche Knopf, was eccentric and old-fashioned, where women were warned against attending meetings because strong language might be used. She soon became an editor, her early clients including John Hersey, Elizabeth Bowen and a promising young author named John Updike. His first book with Knopf was "Rabbit, Run."

"Alfred got on the telephone with John and said, 'You'd better come right away.' He said to me, 'I don't think you should attend the meeting; the language may be a little raw.' Of course, I had seen the language," Jones said. "We did an expurgated edition and every subsequent printing put a little bit back and now it's all there."

Jones was among the first to realize that World War II soldiers returning from Europe might be ready for more sophisticated cuisine. Jones herself was admittedly spoiled by the food in Paris. In the 1950s, she found the bread in New York so tasteless she baked her own at home.

Jones' most famous discovery was Child, a middle-aged American chef in the early '60s who, like Jones, had returned to the states after living for years in Paris. She and co-authors Simone Beck and Louisette Bertholle were seeking a publisher for a cookbook (later titled by Jones "Mastering the Art of French Cooking") which had been rejected by Houghton Mifflin. As recounted in her memoir, Jones was soon convinced that "this was the book I been looking for" and thought Child's recipe for "boeuf bourguignon" worthy of the best dishes in Paris.

"I wanted my food to have the French touch, to taste 'soignee,' not just indifferently cooked," she later wrote. "But there was no book that really taught me how, that is, not until 'Mastering' came along."

Jones treated food like literature and literature like food; both were sensual pleasures. She disliked some of the health food books — "A tablespoon of butter!" Jones told the AP in mock horror. "You're going to die!" She also worried about the rise of celebrity cook books.

"One line I always quote is, 'In a bowl combine the first mixture with the second mixture,'" she said. "It's hideous. Whereas Julia would say (Jones imitates Child), 'Pick it up and plop it in the bowl and get your hands in and squeeze it.'" 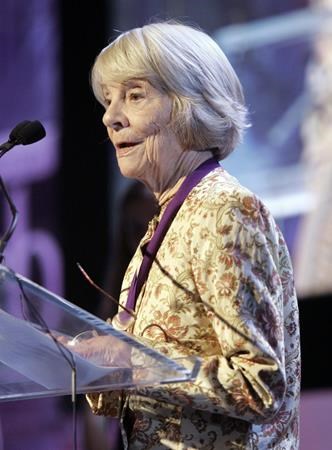