Isabel Gorski, devoted sister, wife, mother, grandmother, and great grandmother, died of natural causes on August 21, 2020 in Herndon, Virginia. <br /> <br /> One of seven children, Isabel was born in Hazleton, Pennsylvania to John and Isabel (Martin) Doggett. She graduated as a registered nurse from the Hazleton State Hospital School of Nursing in 1952. She was a nurse in both Hazleton and later near her longtime home in New Providence, New Jersey. In 1955, she married Henry Gorski and together raised three children, Michael, Isabel, and John. <br /> <br /> In retirement, Isabel and Hank moved to Hendersonville, North Carolina and enjoyed travel and time with friends and family. She was a regular at her book club and a longtime member of the Women's Guild at Immaculate Conception Catholic Church. She looked forward to Easter celebrations with visits from her sisters Alice and Mary Judith and Thanksgivings with her daughter Isabel's and son John's families. After the loss of her beloved husband of 59 years, she relocated to Herndon, Virginia to be near her daughter and her daughter's family. <br /> <br /> Throughout her life, she found comfort and strength in her Catholic faith. She celebrated the successes of her children, grandchildren, and great grandchildren (never failing to send cards for every birthday, sacramental celebration, and graduation). <br /> <br /> She is survived by her brother Robert (Carole) Doggett, son Michael (Cynthia) Gorski, daughter Isabel (Charles) McGrath, son John (Kim) Gorski; six grandchildren: Matthew Gorski, Richard Gorski, Jennifer Larmer, Alissa (David) Roth, Caroline McGrath, and Henry Gorski; and two great grandchildren: Jack Larmer and Julianne Larmer. <br /> <br /> A funeral mass will be held at St. John Neumann Catholic Church in Reston, Virginia on September 24, 2020 at 2 p.m. (streaming available) In lieu of flowers, donations may be made to Sisters of Mercy, (Mid-Atlantic Chapter, Dallas PA designation) at sistersofmercy.org.

Plant a tree in memory
of Isabel 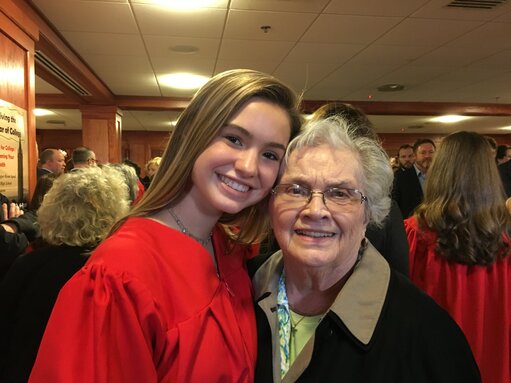 Please provide a valid email address
Cancel
SHARE
Aunt Isabel words to describe , Soft spoken, kind, thoughtful, patient, empathetic, loving, giving, sweet.i don't believe I ever head her raise her voice. That was something that should have happen at all of the family gatherings in New Providence! Never even to Bosco!
I am grateful to have grown up in the love of ( Jacks) siblings, each one giving
me and my family something to help us grow.
The sense of family, right and wrong, respect for others, and doing the right thing because it's
what you do.
A sweet gentle women who was so very well loved and will be sadly missed. Isabel, Mike, John and their families have lost a gem.
That gem is with those who have missed her and have been waiting to see her again. May we all be reunited again someday, but for now smile at the joys of a life that we loved and loved us so .

Aunt Isabel and the Gorski family all hold a special spot for me. Aunt Isabel and I shared a profession of nursing, something just for the two of us.
Eileen Doggett Prodromo Sep 22, 2020
Mom and Dad loved our house on Jane Road in New Providence, NJ. Here they are with the forsythia's in bloom in the backyard.

Every holiday was special but Mom always went all out for Christmas. We always had to have the right Douglas Fir tree (real of course), special cookies (stashed in the basement in canisters), stockings (always with an orange or tangerine on the bottom and some hard candy and the stocking stuffer). Here we are at the big dinner with a young Jennifer entertaining all. Many a fine meal was served at that table. Afterwards a trip to Uncle Jack's (Mom's older brother) for a festive evening adults upstairs, kids downstairs. Pretty special memories.

Mom with younger sister Alice Doggett. I wish I had a better picture but this just seems to "capture" the mood. Alice, Mom's youngest sister (and a real Sister of Mercy), would travel each Easter from Dallas, PA to Hendersonville to visit with Mom and Dad. Here they are relaxing, after dinner no doubt, in the living room in Hendersonville. Sisters enjoying one another. Marie was born to Leo and Mildred East on March 31st, 1923. Three weeks later, she lost her mother and she was raised by her maternal aunt, Florence Phieffer in Three Rivers....

Catherin K Preece, 81, of Vienna, VA, passed away peacefully on March 3rd, 2020 at the Adler Center in Aldie, Virginia surrounded by love and family.

She was born on November...

Why Are So Many People Writing Their Own Obituaries?

Selfie obituaries are on the rise — why?