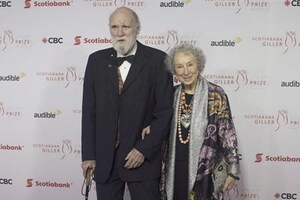 TORONTO — For Canadian author and conservationist Graeme Gibson, the responsibilities of being a writer and citizen were much the same.

Gibson's commitment to Canadian literature permeated nearly every aspect of his life — from his role in organizing the country's writers, to his five-decades-long relationship with author Margaret Atwood.

In the wake of the 85-year-old's death, Gibson is being remembered for putting his words into action for both cultural and environmental causes.

"He was a great moving force in the writing community," said former Governor General Adrienne Clarkson, a friend of Gibson and Atwood.

"They were a very wonderful couple because their interests coincided, they both loved nature. They both felt very much that Canada was a country that was unique and had a special feeling about it."

In a statement, his spouse Atwood said Gibson was suffering from dementia and feared further decline, and his family was grateful he had the "swift exit" he wanted.

"He had a lovely last few weeks, and he went out on a high, surrounded by love, friendship and appreciation," said Atwood. "We are grateful for his wise, ethical, and committed life."

Clarkson said Gibson suffered a severe stroke last Friday, so his children flew out to be at his bedside. "They were all around him when he died, so that was wonderful and a blessing to us all."

Gibson was in England accompanying Atwood to promote the release of "The Testaments," her sequel to "The Handmaid's Tale." Several events on the book tour have been postponed, including appearances in Toronto, Ottawa and Montreal.

"He'd had a wonderful week because she presented her 'Testaments,' as you know, in (London's National Theatre) to the world," said Clarkson. "He had to leave, but he was 85 ... and he had lived a wonderful life."

Born in London, Ont., on Aug. 9, 1934, Gibson studied at the University of Western Ontario and later taught English at Ryerson University in Toronto.

Even early in his career, Gibson displayed an activist streak. In the early 1970s, he scaled a statue of Egerton Ryerson on the school's campus, wrapping it in an American flag to protest the sale of Ryerson Press to a U.S. company.

Meanwhile, Gibson was making his mark with his modernist writing in his first two novels, 1969's "Five Legs" and "Communion" two years later.

His style evolved in 1982's "Perpetual Motion," which explores the human desire to dominate the natural world. Eleven years later, he published "Gentleman Death," centring on a writer confronting his own creativity and mortality.

His passion for writing was evident not only on the page, but in his advocacy for writers’ freedom of expression, said PEN Canada president Richard Stursberg.

In addition to PEN Canada, Gibson co-founded several organizations to support Canadian writers, including Writers' Trust of Canada and the Writers' Union of Canada, which he chaired from 1974 to 1975.

"He was, without doubt, one of the most important and seminal figures in the emergence of English Canadian literature," Stursberg said of Gibson, who occupied his role at PEN Canada from 1987 to 1989.

An avid birdwatcher and environmentalist, Gibson was a council member of World Wildlife Fund Canada and chairman of the Pelee Island Bird Observatory.

Atwood was Gibson's partner in many of these literary, nature-loving and activist pursuits.

Peter Raymont, who is co-directing a documentary about the couple, said Gibson and Atwood first met at a literary awards party at Grossman's Tavern in Toronto.

According to Raymont, both writers thought the other should have won. And from there, a roughly 50-year relationship blossomed.

For the past several decades, the two shared a home in Toronto. They also spent several years on a farm in rural Ontario.

Even after Gibson was diagnosed with dementia, he travelled the world with Atwood, making her laugh even in his last months, said Raymont.

Gibson always brought out the "fun-loving side" of Atwood, Raymont said, and he sometimes caught the two of them "giggling together like teenagers."

"We were really honoured to witness the love between them both," he said. "It's as if they were still at that pub at Grossman's. You really, really felt that."

Gibson is survived by Atwood and their daughter, Jess. Gibson also had two sons with Shirley Gibson, with whom he divorced in the early 1970s.

This report by The Canadian Press was first published Sept. 18, 2019.

— with files from Victoria Ahearn and Cassandra Szklarski and Associated Press