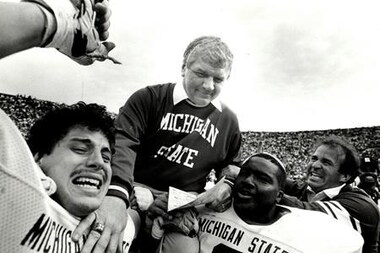 George Perles, who coached Michigan State to a Rose Bowl victory in 1988 and was a key defensive assistant for the dominant Pittsburgh Steelers teams of the 1970s, died Tuesday. He was 85.

“George touched so many lives. He helped so many people. He was fiercely loyal and never forgot where he came from," said Brian Mosallam, a former Michigan State football player now on the Board of Trustees. “We lost a giant.”

Michigan State hired Perles in 1983 to revive its beleaguered football program. He did just that, winning Big Ten titles in 1987 and 1990 and coaching the school in seven bowl games. He helped the Spartans beat Southern California, 20-17, on Jan. 1, 1988, for their first Rose Bowl win in three-plus decades.

Perles was an assistant coach for the Spartans before he was hired away in 1972 to coach the Steelers’ defensive line. He later was defensive co-ordinator and assistant head coach for a team that won four NFL championships in six years. The Philadelphia Stars of the U.S. Football League signed him in 1982, but he got out of his contract to return to the campus in East Lansing, Michigan.

The Green Bay Packers tried to lure Perles to the NFL shortly after his Rose Bowl victory and the New York Jets tried two years later. Both times Perles leveraged the opportunities to get what he wanted at Michigan State.

He signed a 10-year contract after passing on the chance to lead the Packers. Just before he was going to be introduced as the Jets’ coach in 1990, he was given the title of athletic director despite objections from John DiBiaggio, the university president.

Perles was forced to give up the AD job in 1992 and was fired as coach late in the 1994 season with the team on the way to a 5-6 finish. After an outside investigation, Peter McPherson, then the school president, said the Spartans would forfeit their games because of an academic scandal. The NCAA cleared Perles.

“I would never have stayed at Michigan State if I knew there could be so much conflict about it, or that my staying could somehow hurt the school,” he said in his book, “George Perles: The Ride of a Lifetime,” published in 1995. “I would have taken the job with Green Bay (in 1988) or with the Jets (in 1990) if I had known what was coming.”

Nick Saban, a former assistant took over as Michigan State coach after Perles.

“He was one of my mentors in this profession, and he gave me my first opportunity to be in a position of leadership as the defensive co-ordinator at Michigan State," said Saban, now Alabama's head coach. “I learned an incredible amount of both football and life from him over the years.”

Perles stayed in Michigan for the rest of his life and helped create the Motor City Bowl, using his charm to get the three major automakers to team up as sponsors for the post-season game.

“In addition to being a great Spartan, he was a problem solver,” said Ken Hoffman, who was a sports information director at Michigan State and also became executive director of the bowl. “Whenever there was an issue, he found a way.”

Perles was elected to the Michigan State Board of Trustees in 2006 and was re-elected eight years later. He resigned in November 2018, citing his age and his struggles with Parkinson's disease.

Perles was born and raised in Detroit, where he lived in a one-bedroom apartment with his parents. He attended Western High School and starred on the baseball and football teams.

He went to the University of Tennessee to play football but lasted only a semester, transferring to Florida State but moving back quickly to the Motor City. He joined the Army in 1954 and enlisted for two years before heading to Michigan State.

Shortly after he was eligible to play in 1958 for coach Duffy Daugherty, Perles — a lineman — had a career-ending knee injury and accepted an offer to be a student assistant. After stints coaching prep football in Chicago and suburban Detroit, he was an assistant at the University of Dayton for two years before returning to be an assistant for Daugherty in 1967.

Greene remembered suggesting to Perles during the 1974 season that he line up in an inside gap instead of slanting into it. That led to the Stunt 4-3, a staple of one of the NFL’s great defences known as the Steel Curtain.

“We worked on it during practice that season when we went on to win our first of four Super Bowls, but it wasn’t a big part of the game plan until we played Oakland in the playoffs,” Greene said in a 2019 interview with The Associated Press. “Oakland didn’t know what to do with it. For about 2 1/2 seasons, no one could run inside us because we had everything locked down. If George said my idea was bad, we may not have ever seen the Stunt 4-3.”

Mark Dantonio, Michigan State's current football coach, recalled having Perles' support from the moment he arrived on campus in 2007.

“Coach Perles exuded confidence, conviction and toughness. He really gave his life to Michigan State, all the way till the end," Dantonio said in a statement. “He was someone you could lean on."

It's important — but is it covered?
See all