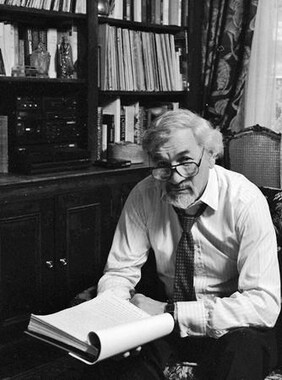 NEW YORK — George Nicolau, who ruled against baseball owners in two collusion cases and served as president of the National Academy of Arbitrators, has died. He was 94.

In another notable decision, Nicolau decided in 1987 to cut short a season-long suspension of free agent pitcher LaMarr Hoyt to 60 days. Hoyt had been penalized for his involvement in three illegal drug incidents during 1986.

Nicolau decided to reinstate Steve Howe in November 1992, overturning a lifetime ban imposed by Commissioner Fay Vincent the previous June. The pitcher was suspended seven times for infractions related to drug or alcohol use. Nicolau determined Howe had a psychiatric disorder and the commissioner's office didn't adequately test him.

In a case with impact for many players, he ruled in 1986 against pitcher Dennis Lamp's grievance that Toronto held him out of games so he could not accumulate bonuses hinged to his games played.

"George Nicolau was an outstanding professional, a true giant among labour arbitrators," said Commissioner Rob Manfred, who often appeared before Nicolau as a management lawyer. "He deftly handled many difficult cases in baseball and always had the respect of both parties."

"He was intelligent, fearless and incisive, always presiding with dignity, grace and humour," said former baseball union head Donald Fehr, who now is head of the NHL union. "He wielded power of the written word to convey both understanding of the issues and the justice of the result as well as anyone ever has. Above all, he always acted with consummate integrity and gravitas that inspired all who worked with him to rise above the short term and seek out common ground."

Nicolau remained baseball's panel chairman until 1995, when he was replaced by Nicholas Zumas. Nicolau's term is the second longest in baseball behind Shyam Das, who served from 1999-2012.

A Detroit Tigers fan, Nicolau was a son of Greek immigrants who ran restaurants in Detroit and Jackson, Michigan. He kept Hank Greenberg's picture hanging in the kitchen of his Manhattan townhouse.

"He became a friend, with all the attributes you'd want in one," Orza said. "He was generous, witty, smart, principled, and kind. ... He'd have made a great novelist."

Nicolau was born in Detroit on Feb. 14, 1925, then moved with his family to Jackson when he was about 5. He went into the Army Air Corps as a second lieutenant, flew four missions in B-17 Flying Fortresses over Germany as a bomber navigator during World War II and lost a leg during his service. On the second mission, the plane was to bomb an airfield in Evreau but went off course and wound up over Nazi-occupied Paris. But the pilot refused to believe it.

"I know the Eiffel Tower when I see it," Nicolau said during a 1990 interview with The Associated Press, recalling what he told the pilot.

During his fourth mission, Nicolau got hit with flak en route to Leipzig, Germany. His left leg was badly injured.

"It was hanging by a thread two days later," he said. “The bone was shattered.”

After a year's convalescence, he attended the University of Michigan. He went on to Columbia Law School and became a labour lawyer for 12 years.

At his first law firm, Sheehan & Harold, he represented locals of the International Typographical Union, the Printing Pressman and the Atomic Energy Workers. In 1954, he joined Cooper, Ostrin and DeVarco, where he represented the Newspaper Guild, the Communications Workers of America, the National Maritime Union and Actors Equity. He was one of the advisers who led Equity through its initial strike in 1960.

He was made a partner at the firm but left in 1962 he left to work for R. Sargent Shriver as deputy director for special projects in the U.S. Peace Corps' Washington Office. Nicolau prepared on annual reports and congressional testimony and also did field work in Peru, Colombia, Ecuador and the Dominican Republic.

"What made me decide to do that is John Kennedy, it was as simple as that," he said.

After spending 1963-65 at the Peace Corps, he became deputy regional director of the U.S. Office of Economic Opportunity from 1965-66, the first commissioner of New York City's Community Development Agency from 1966-68 and executive director of the Fund for the City of New York from 1968-70.

He shifted to executive director of the Institute for Mediation and Conflict Resolution from 1970-80 at the behest of noted mediator Theodore Kheel and started hearing arbitration cases part-time in 1970. He joined the National Academy of Arbitrators in 1975, saying he was influenced do to so by Peter Seitz, who headed baseball's arbitration panel at the time and would go on to strike down the reserve clause that December in the Andy Messersmith-Dave McNally case.

Nicolau ruled in disputes involving ABC, NBC and the National Association of Broadcast Employees and Technicians, then became a full-time arbitrator in 1980, He became the NBA's arbitrator after he met former New York Knicks player Bill Bradley, who introduced him to NBA union head Larry Fleischer, who in turn took him to speak with NBA Commissioner Larry O'Brien.

Nicolau also was the arbitrator for the Major Indoor Soccer League.

In addition to sports and television, Nicolau arbitrated disputes in aviation, communications and entertainment. He joined the board of governors of the National Academy of Arbitrators in 1986 and served as president in 1996-97.

Nicolau was hearing cases and issuing decisions through 2019, ruling last August in an airline dispute.

"He knows the subject matter and he is able and he's got integrity," Kheel said. "Knowledge, ability and integrity. Those are the three things you need and George has got 'em all."

His wife, the former Siobhan Oppenheimer, died at 82 from cancer in 2013.

He is survived by sons Brien and Tony, and step-daughter Trudy Oppenheimer and step-sons David and John Oppenheimer, and six grandchildren.

A memorial service will be scheduled.

A year of losses in review
See all