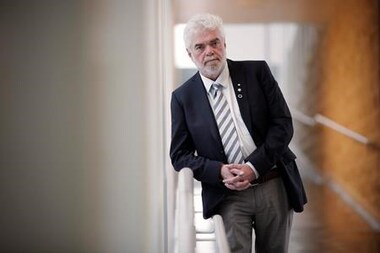 WINNIPEG — The former scientific director of Canada's National Microbiology Laboratory who had experimental brain surgery to battle alcoholism has died.

Plummer was a mentor, she said, who helped set up and make the national laboratory in Winnipeg a world-class institution.

Plummer was at the helm of the lab during the SARS, influenza and H1N1 epidemics, as well as during the development of an Ebola vaccine.

Prior to his time at the lab, Plummer's research shaped public health policy around the world. He built a world-class research operation in Kenya, where he observed a particular group of women who had a natural immunity to HIV-1. That discovery provided important information for HIV vaccine and drug development.

"He was admired and regarded highly by academics and researchers around the world, and his legacy of seeking to develop an HIV vaccine remains one of the landmarks of infectious disease prevention," University of Manitoba president David Barnard said in a statement.

"His contributions have had a cumulative global impact on saving the lives of tens of thousands of people for decades and also improving the lives of HIV positive people around the world," added Digvir Jayas, the university's vice-president of research.

Plummer had recently shared his own battle with alcoholism. In an article he wrote for Toronto's Sunnybrook Health Sciences Centre, Plummer explained how he began to drink scotch to "to celebrate, relax and deal with stress, anxiety, disappointment and grief."

After decades of drinking, attempts at quitting and a liver transplant, Plummer decided to get experimental treatment using deep brain stimulation in 2018.

"Having committed my career to medical science and human health I saw this study as one more way to make a contribution — this time, literally using my brain!" Plummer wrote.

Keith Fowke, head of medical microbiology and infectious diseases at the University of Manitoba, was a grad student under Plummer's tutelage when they made the major discovery in Kenya. They later became close friends and colleagues.

Fowke said as a scientist or a research participant, Plummer always wanted to help people.

"He was always focused on truth and knowledge and making the world a better place," Fowke said.

Fowke described his friend as warm and kind. He called Plummer a loving father and husband who enjoyed having his friends over for dinner.

"He wanted everyone to know he was a proud Winnipegger and a proud Canadian, and that all of us can make important globally significant contributions."

This report by The Canadian Press was first published Feb. 4, 2020