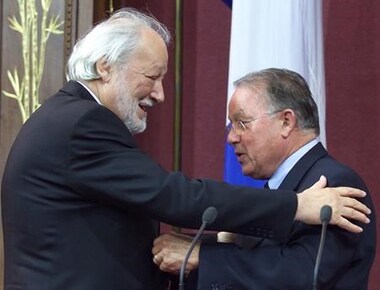 MONTREAL — Fernand Daoust, a long-time Quebec union leader best known for his time with the Quebec Federation of Labour (FTQ), has died at 93.

The cause of death wasn't made public but Daoust, who died Wednesday, had been ill for some time.

Daniel Boyer, president of the Quebec Federation of Labour said in a statement on Thursday he was profoundly saddened by Daoust's death.

Boyer paid tribute to Daoust as a man dedicated his life to making Quebec a modern, fair and democratic society and for shaping the federation into the influential position it holds today as the province's largest union.

Known as the "le grand Fernand," Daoust was often seen alongside Louis (Ti-Louis) Laberge, his running mate at the helm of the FTQ for a quarter-century.

His labour union involvement spanned more than four decades — from 1950 until 1993.

Born Oct. 26, 1926, the son of a mailman and a seamstress, Daoust studied economics and industrial relations at the social sciences faculty at the Universite de Montreal.

He got his start in organized labour in 1950, first with the hatmaker's union and then at the Canadian Labour Congress.

In 1959, he was an adviser to the union representing petroleum industry workers and in 1968, he became the Quebec director of the Canadian Union of Public Employees.

In 1964, Daoust lost the presidency of the Quebec Labour Federation by a single vote to Laberge, in the process becoming his right-hand during more than a quarter century as secretary general, a post he held until 1991, after which he became president.

If Laberge, who died in 2002, had the reputation of being hot, colourful and direct, Daoust, his right-hand man, embodied the intellectual, reserved, affable diplomat.

Daoust's other major passion was defending the French language. He often paired the two, fighting for the strengthening of French in the workplace.

In 1977, he sat on the board of directors of the Office de la langue francaise — Quebec's French language watchdog — and was also a member of the Mouvement Quebec francais, a French language rights group.

The union says funeral details will be made public later in the week.

This report by The Canadian Press was first published Jan. 23, 2020.