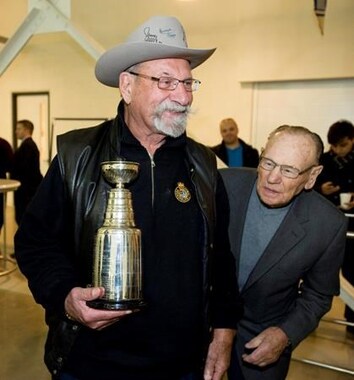 Clear the Track: Winger Eddie Shack entertained on and off the ice

Eddie Shack, one of the NHL's most colourful players on and off the ice, died on Saturday. He was 83.

The Toronto Maple Leafs announced the news in a tweet Sunday morning.

"Eddie entertained Leafs fans on the ice for nine seasons and for decades off of it. He will be greatly missed," the team said in the tweet. "Our thoughts are with his family."

Known for his bruising style, distinctive skating gait and larger-than-life personality, Shack won four Stanley Cups with Toronto in the 1960s, including the franchise's last victory in 1967.

Nicknamed "The Entertainer" — with his trademark cowboy hat and luxurious moustache — he scored the winning goal for the Leafs in the 1963 final.

The native of Sudbury, Ont., played parts of 17 seasons from 1958 through 1975 with six different teams, including nine years with the Maple Leafs.

Former Maple Leafs captain Doug Gilmour, who played with the team in the 1990's, said in a tweet he was "sad at the loss but so happy to have known him."

"Eddie Shack taught me two important things — see humour in just about everything, and live like a Champion," Gilmour said. "Four cups with the Leafs and a personality larger than life."

In October 2016, Shack was listed as No. 68 on The One Hundred, a list of the 100 greatest Leafs that was released as part of the team's centennial anniversary.

"Clear the Track" by Douglas Rankine with The Secrets, started "Clear the track, here comes Shack. He knocks 'em down and he gives 'em a whack. He can scores goals, he's got a knack. Eddie, Eddie Shack."

The song, the brainchild of broadcaster Brian McFarlane, debuted in February 1966 and topped the Toronto music chart.

Shack was a bull in a china shop and took a toll on the opposition, knocking out Gordie Howe twice. But he recalled striking a deal with the legendary Howe that ended their on-ice hostilities when they met at a golf tournament in Vermont.

They agreed not to hit each other from then on, shaking hands on it.

Shack recalled Jean Beliveau asking him why he would hit him and then apologize.

But Shack also knew when he was outmatched, famously skating away from Bob Kelly and the Plager brothers in a game against St. Louis in the early 70s.

Shack drifted away from the Leafs' organization after retiring, but like many players from the team's 1960s dynasty, had returned to the fold in recent years.

Born to Ukrainian immigrants on Feb. 11, 1937, Shack was working at a butcher's shop in Sudbury when he tried out for the Guelph Biltmores of the Ontario Hockey Association. He went to play five seasons for the Biltmores and one for the AHL Providence Reds before signing with the New York Rangers, the Biltmores' parent club.

Toronto mayor John Tory tweeted his memories of Shack Sunday, recalling some "listless" Leafs games that were ignited once Shack stepped onto the ice.

"It was crazy, it was fun, & it was a big part of our winning those Cups. Note to heaven: Clear the track, here comes Shack!" Tory said.

Shack made his NHL debut in 1958 and was traded to Toronto in 1960 after refusing to go to Detroit.

Shack scored a career-high 26 goals with Toronto in 1966, but was traded to the Boston Bruins the next spring following the Leafs' final Cup win. He would go on to play with the Los Angeles Kings, Buffalo Sabres and Pittsburgh Penguins before returning to Toronto for two final seasons.

Shack became a popular advertising spokesman for a number of brands in Canada following his playing days, including for the soft drink company The Pop Shoppe.

"Maybe I didn't go far in school. But there's one thing I've learned from my mum and dad," he told a group of kids in a 1978 Pop Shoppe commercial. "Look after the nickels and dimes and the dollars will look after themselves."

Shack, whose nose was hard to miss, had a signature line: "I've got a nose for value."

In 1990, he appeared out of a suitcase on a hotel bed in a commercial for the Journeys End hotel chain.

In 2019, he released a book called "Hockey's Most Entertaining Stories." He had plenty, joking they came out faster with a few cocktails.

This report by The Canadian Press was first published July 26, 2020. 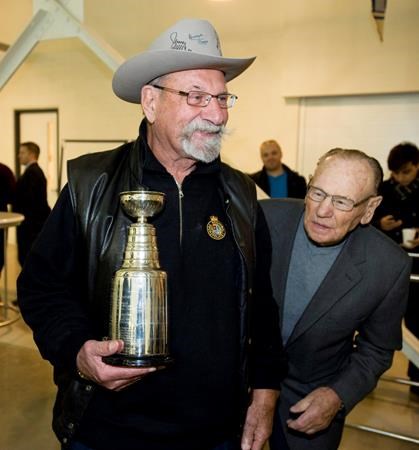