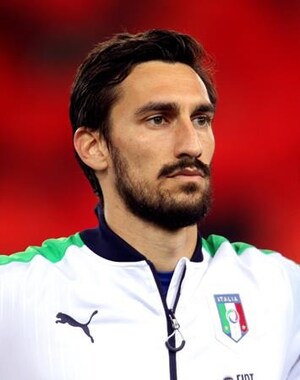 Fiorentina captain Davide Astori, a defender who has also been capped by Italy 14 times, has died, the club announced.

Fiorentina captain Davide Astori was found dead in his hotel room on Sunday at the age of 31 after a suspected cardiac arrest before an Italian league match.

The defender, who also played 14 times for Italy's national team, was discovered by Fiorentina staff when he failed to show up for breakfast at the hotel in Udine. Fiorentina's game at Udinese in northeast Italy was called off, along with all fixtures in the country's top two divisions.

Astori's body was taken to the Santa Maria della Misericordia Hospital for an autopsy.

"The belief is that the player died of a cardiac arrest by natural causes," Udine prosecutor Antonio De Nicolo said. "It is strange that such a thing should happen to a professional who is so closely monitored without there being any warning signs."

Fiorentina said Astori, who had played for the club since 2015, was "hit by a sudden illness." Club President Andrea Della Valle said Astori had been due to sign a new contract on Monday and that it would have tied him to the club "for life."

"For this terrible and delicate situation, and above all out of respect for his family, we appeal to the sensitivity of everyone," the team said in a statement.

Astori leaves behind his partner, Francesca Fioretti, and their 2-year-old daughter.

Fioretti was informed of the news by Fiorentina directors who visited her personally, while Astori's parents, who live in Bergamo, were told on the telephone.

In Florence, fans attached scarves, flowers and messages to the gates of the team's stadium, while banners paying tribute to him were put up outside several other stadiums.

There was an outpouring of shocked reaction across the soccer world. The English Football Association said it plans to honour Astori when it hosts Italy at Wembley on March 27 in a friendly.

Genoa and Cagliari were preparing to play in Serie A's early game when the players were told of Astori's death. Several — many of whom had played with Astori for Italy — walked off in tears. When the match was officially called off, a picture of Astori was shown on the giant screen, leading to applause throughout the stadium.

Cagliari coach Diego Lopez, who played and coached Astori at the Sardinian club, had to receive medical treatment after finding out the news, as did Carlos Sanchez, who is on loan from Fiorentina at Espanyol.

"I'm shocked, it's an absurd tragedy," said Giovanni Malago, the president of Italy's national Olympic committee. "The football world is deeply affected by what has happened. Words mean nothing, the decision to postpone the matches is the right one.

"Often people say 'the show must go on' but that's not always right for me. Football is the most popular sport but also the one that has to give special signs at this time."

Juventus captain Gianluigi Buffon, a former Italy goalkeeper, posted a picture of himself with Astori on Instagram.

"Ciao dear Asto," Buffon wrote in Italian before going on to say that he rarely talks publicly about people but was making an exception "because ... above all your little daughter, deserves to know that her father was in every way a GOOD PERSON. a TRULY GOOD PERSON."

Chelsea coach Antonio Conte, who coached Italy from 2014 to 2016, struggled to hold back the tears as he reacted to the death before a Premier League game at Manchester City. He wore a black armband during the match in tribute.

"This is a tragedy," Conte said. "This news really hurt me and it's very difficult in this moment to find the right words for the family. ... He was a great player, especially a fantastic guy."

Astori made his Italy debut in 2011 and played at the 2013 Confederations Cup in Brazil where he scored against Uruguay.

"You were the best expression of an old-fashioned world," Buffon said, "one that people have left behind, and which was governed by values like altruism, elegance, politeness and respect toward others.

"Genuine compliments, you were one of the best sporting figures I ever came up against."

Astori started out in the Milan youth academy but never played a senior match for the Rossoneri, making his Serie A debut with Cagliari in 2008.

He spent six years at the Sardinian club before loan spells at Roma and Fiorentina, where he was signed on a permanent basis in 2016.

"Davide was always the epitome of great professionalism and reliability," Roma coach Eusebio Di Francesco tweeted. "An amazing person. I too feel the grief of all his loved ones."

Italian soccer has more stringent rules and tests than many other countries, with professional athletes in Italy required to undergo certain checks every six months.

"Risk of sudden death goes right down with all the checks but you can't avoid it completely," said Carlo Tranquilli, a specialist in sports medicine and former doctor for Italy's under-21 team for 18 years.

"In our country we have a lot more checks and there are few like us in the world."