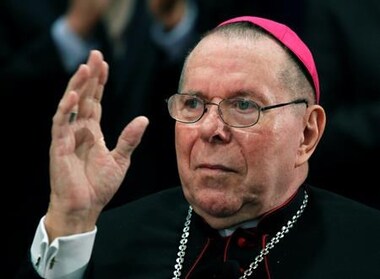 INDIANAPOLIS — Archbishop Daniel Buechlein, who led the Indianapolis Roman Catholic Archdiocese for 19 years before a stroke forced his retirement in 2011, has died. He was 79.

Buechlein died early Thursday at the infirmary of southern Indiana's St. Meinrad Archabbey, where he had been living since his retirement, according to the archdiocese. Spokesman Greg Otolski said he didn't immediately know the cause of Buechlein's death, but that his health had been declining over the past month.

Buechlein was bishop of the Memphis, Tennessee, diocese for five years before Pope John Paul II named him the fifth archbishop of Indianapolis in 1992. He grew up in the southern Indiana city of Jasper and became a Benedictine monk at St. Meinrad, including serving as president-rector of its college.

"He was a faithful monk, priest, rector and bishop," Thompson said in a release. "Like so many, I will certainly miss him. He was such a tremendous model of prayerfulness, holiness and leadership."

During his retirement news conference, Buechlein said he believed his greatest accomplishment was strengthening the education system for the archdiocese, which includes some 225,000 Catholics in 39 central and southern Indiana counties.

Enrolment in the archdiocese's schools increased during Buechlein's tenure by 30 per cent, to more than 25,000 students, reversing a 25-year decline, according to the archdiocese.

"With your help and the help of God we've accomplished much together," Buechlein said.

Buechlein opened Bishop Simon Brute College Seminary in Indianapolis in 2004 to prepare college students before they begin their formation for the priesthood. The seminary, named for the first bishop of Indianapolis, reached its capacity with 35 students before Buechlein's retirement.

He also ordained 25 men as permanent deacons in 2008, making Indianapolis the final Catholic archdiocese in the country to adopt the ministry after it was restored by Pope Paul VI in 1967. Deacons, who are often married, can perform some Catholic sacraments such as baptism and marriage, but cannot lead Masses. The archdiocese now has 40 active deacons.

Buechlein's stroke in 2011 left him unable to stand on his own. That illness followed chemotherapy and radiation treatments for Hodgkin's lymphoma in 2008 and surgery to remove a non-cancerous tumour from his abdomen in 2010.

Public visitation is scheduled for Tuesday from 9 a.m. to 9 p.m. at Saints Peter and Paul Cathedral in Indianapolis, where his funeral Mass will be held at 11 a.m. Wednesday, according to the archdiocese. Buechlein will be buried the following day at St. Meinrad's cemetery. 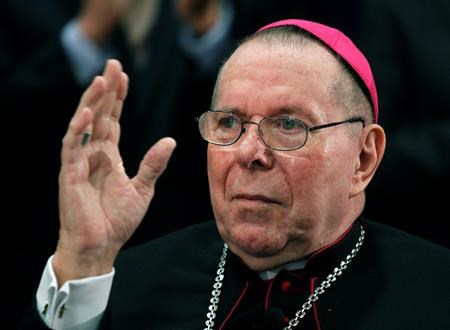