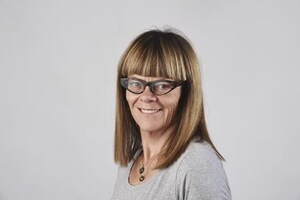 Blatchford had been undergoing treatment for lung cancer at Princess Margaret Cancer Centre in Toronto.

The cancer had metastasized to bones in the spine and hip by the time it was detected late last year, according to a profile her newspaper the National Post published in November.

"We'll miss her always," her brother, Les Blatchford, said Wednesday morning. "She was a great gal."

Known as a tenacious reporter and unflinching social critic, Blatchford leaves behind a large body of work that was often bracingly frank, charged with emotion, and cut with humour.

A five-decade career cemented Blatchford as one of the country's most enduring voices on the courts and crime beat, and her willingness to critique controversial social issues earned her a reputation for uncompromising, and often polarizing, viewpoints, most recently on the #metoo movement.

For the candid and notoriously ribald "Blatch," this was all in service of her mission to speak truth to power.

Criminal defence lawyer Marie Henein spoke of this as she presented Blatchford with the George Jonas Freedom Award at a gala in Toronto last June, describing an unapologetic, tough-as-nails writer whose pieces captured the "humanity" of a courtroom.

"While lawyers and judges may rail against what she writes sometimes — may get infuriated even — here's our dirty little secret, I'm going to share it with you: They all get nervous when she walks into court. We know she is there and everyone — every single one of them, every judge and every lawyer — reads her first. And they do it for one reason: Her opinion matters, her perspective matters."

Blatchford's recent reports for the Post and Postmedia chain of newspapers ranged from Prime Minister Justin Trudeau's blackface and SNC-Lavalin scandals to the death of her beloved white bull terrier, Obie, in September.

In one of her final columns in October, she wrote about nagging muscle pain that forced her to leave the Liberals' federal election tour only six days in — a mysterious ache that kept her from logging her daily 10-to-15-kilometre runs and instead led to a devastating diagnosis.

In many ways, journalism ran through Blatchford's blood.

Although she never met her grandfather, Andy Lytle was a prominent sports writer and editor for the Vancouver Sun in the '20s and '50s, and a sports editor at the Toronto Star in the '30s and '40s. Her uncle, Tommy Lytle, was a longtime Toronto Star editor who retired in '74, and for whom she wrote a touching tribute in the Globe and Mail in June 2005.

Blatchford's story began May 20, 1951 in Rouyn-Noranda, Que., where she was born to Kay Lytle and Ross Thomas Blatchford, a navigator and flight lieutenant during the Second World War.

She joined the Globe and Mail in 1972 while studying journalism at Ryerson University in Toronto, and spent the first four of those six years as a sports columnist. A natural storyteller, Blatchford was captivated by both professional and amateur sports and served as the marquee Olympics columnist for various papers that followed.

She quit the Globe "in a snit" when the sports department "began messing with my copy," Blatchford says in her 2016 book "Life Sentence," heading to the Star for the next four years.

It was during her second year there, on Jan. 16, 1978, that she covered her first criminal trial at the age of 26: "I had no idea I was beginning to serve a self-imposed life sentence," she writes.

Blatchford next headed to the Toronto Sun as a columnist, and her 15 years at the city tabloid firmly established her dynamic flair for inspiring water-cooler rants among readers, whether they loved her or hated her.

Such was the vitriol she generated with divisive hot-takes that her work later inspired a website and Facebook page dubbed "Fire Christie Blatchford" — essentially a repository for likeminded readers to quote vivid prose they most despised while calling for her ouster.

When the National Post was created in 1998, Blatchford was one of the first writers hired, and the following year she won a National Newspaper Award for her column writing.

She returned to the Globe in 2003 to write columns and cover the courts, but in 2011 was drawn back to Postmedia News, which she called her "natural home."

Former Postmedia president and CEO Paul Godfrey, who currently serves as the company's executive chairman, admits his "immediate goal was to get Christie back" when he took over Postmedia in 2010.

"She was a jewel to have in your stable of journalists because she could write about anything. If you asked her to cover politics, sports, crime, anything like that, ask her to become a columnist and do a feature story on someone, she got to the bottom of it. Nothing fazed her," Godfrey says of Blatchford, also a mainstay on local radio through regular appearances on Toronto's NewsTalk1010.

She was competitive to be sure, but Blatchford could also be incredibly sentimental and deeply moved by the tragedy she often encountered, says Godfrey, recalling the 2005 Boxing Day shooting that killed 15-year-old Jane Creba as especially hard.

"The tears that covered her computer on the night of the shooting outside the Eaton Centre at Christmas time, she was a total mess on that. She had trouble writing the story because she was crying so much."

Blatchford was inducted into the Canadian News Hall of Fame last November but was too unwell to attend.

She was also the author of several non-fiction books, including "Fifteen Days: Stories of Bravery, Friendship, Life and Death from Inside the New Canadian Army," based on her experiences during four trips to Afghanistan in 2006 and 2007. It won the 2008 Governor-General's Literary Award in non-fiction.

This report by The Canadian Press was first published Feb. 12, 2020.