BACK
Beyond the Dash
×
In this June 18, 2011, file photo, NASCAR Hall of Famer Bud Moore is seen on pit row before the qualifying laps for a NASCAR Sprint Cup Series race at Michigan International Speedway in Brooklyn, Mich. NASCAR Hall of Famer Bud Moore, a World War II veteran awarded five Purple Hearts and two Bronze Stars, has died. He was 92. NASCAR announced the death of Moore, born Walter Moore Jr., on Tuesday, Nov. 28, 2017. No details were given, but Moore lived in Spartanburg, South Carolina. (AP Photo/Bob Brodbeck) 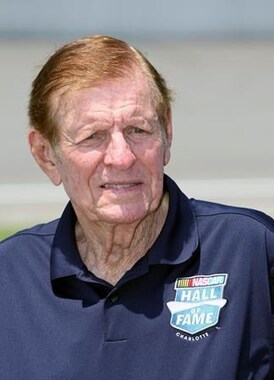 NASCAR announced the death of Moore, born Walter Moore Jr., on Tuesday. No details were given, but Moore lived in Spartanburg, South Carolina.

Moore won the NASCAR title in 1957 as crew chief for Buck Baker and car owner titles in 1962 and 1963 with Joe Weatherly. He was the oldest living member of the NASCAR Hall of Fame. He was inducted in 2011.

"Bud left an indelible mark on NASCAR. We are humbled that he considers his crowning achievement as his induction in the second class of the NASCAR Hall of Fame, one of our first 10 inductees," said Winston Kelley, the hall's executive director.

"Through all his professional racing success, Bud's most significant contribution was to his country. While we have lost one of NASCAR's and the United States' true pioneers and heroes, Bud's legacy and memory will always be remembered, preserved, celebrated and cherished."

Moore joined the military in 1943 as an 18-year-old machine-gunner. He was assigned to the 90th Infantry Division, which landed on Utah Beach in France on D-Day. His unit was attached to General George W. Patton's "Third Army," which pushed to liberate Europe.

"Many choose the word 'hero' when describing athletes who accomplish otherworldly sporting feats. Oftentimes, it's an exaggeration. But when detailing the life of the great Bud Moore, it's a description that fits perfectly," NASCAR Chairman Brian France said in a statement.

"Moore, a decorated veteran of World War II, served our country before dominating our sport as both a crew chief and, later, an owner ... on behalf of all of NASCAR, I offer my condolences to Bud's family, friends and fans. We will miss Bud, a giant in our sport, and a true American hero."

NASCAR was formed in 1948 and Moore quickly found a spot in the sport after the war. He referred to himself as "a country mechanic who loved to make 'em run fast."

Moore was over 6 feet tall, making him a standout in the garage and victory lane, where he visited 63 times as an owner.

Teamed with Weatherly, the duo won eight times in 1961 and 12 times during their back-to-back championship seasons. Weatherly died in early 1964 during a race at Riverside (Calif.) International Raceway, ending what could have been a NASCAR dynasty.

Moore's team would not win another title, including in 1978 when Hall of Famer Bobby Allison was runner-up. Allison won the 1978 Daytona 500, a feat not previously accomplished by Moore or Allison.

Moore's final NASCAR win as an owner was in May 1993 at Sonoma Raceway.

Moore is survived by three sons, five grandchildren, seven great-grandchildren and three great-great grandchildren. He was preceded in death by his wife of 64 years, Betty Clark Moore.

Services and arrangements are still being finalized, but the family asked for donations in Moore's name be made to Victory Junction, Wounded Warrior Project or Hearing Charities of America, Hearing Aid Project.