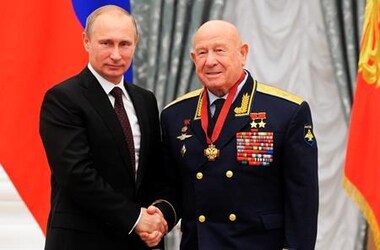 MOSCOW — Alexei Leonov, the legendary Soviet cosmonaut who became the first human to walk in space 54 years ago — and nearly didn't make it back into his capsule — has died in Moscow. He was 85.

Russian space agency Roscosmos made the announced on its website on Friday, without providing a cause for his death. Russian media earlier reported that Leonov had had health issues for several years.

NASA broke into its live televised coverage of a spacewalk by two Americans outside the International Space Station to report Leonov's death. "A tribute to Leonov as today is a spacewalk," Mission Control in Houston said.

Leonov was born in 1934 in a large peasant family in western Siberia. Like countless Soviet peasants, his father was arrested and shipped off to Gulag prison camps under Soviet dictator Josef Stalin but he managed to survive and reunite with his family

The future cosmonaut had a strong artistic bent and even thought about going to art school before he enrolled in a pilot training course and, later, an aviation college. Leonov did not give up sketching even when he flew into space, and took colored pencils with him on the Apollo-Soyuz flight in 1975 to draw.

Leonov staked his place in space history on March 18, 1965, when he exited his Voskhod 2 capsule secured by a tether.

Spacewalking always carries a high risk but Leonov's pioneering venture was particularly nerve-wracking, according to details of the exploit that only became public decades later.

His spacesuit had inflated so much in the vacuum of space that he could not get back into the spacecraft. He had to open a valve to vent oxygen from his suit to be able to fit through the hatch.

On his second trip to space ten years later, Leonov commanded the Soviet half of Apollo-Soyuz 19, the first joint space mission between the Soviet Union and the United States, carried out at the height of the Cold War. Apollo-Soyuz 19 was a prelude to the international co-operation seen aboard the current space station.

The cosmonaut turned 85 in May. Several days before that, two Russian crewmembers on the International Space Station ventured into open space on a planned spacewalk with stickers attached on their spacesuits paying tribute to him, and congratulated him from space.

Leonov is to be buried on Tuesday at a military memorial cemetery outside Moscow, Roscosmos said.

Kremlin spokesman Dmitry Peskov on Friday relayed the Russian president's condolences for Leonov's family saying that Vladimir Putin and the cosmonaut knew each other well and often saw each other.

Messages of condolences poured from around the globe.

NASA on Friday offered sympathy to Leonov's family, saying it was saddened by his death.

"His venture into the vacuum of space began the history of extravehicular activity that makes today's Space Station maintenance possible," NASA said on Twitter.

Marcia Dunn contributed to this report from Cape Canaveral, Florida.