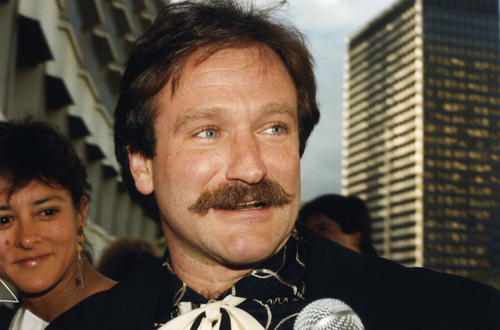 Robin Williams is one of the most beloved actors and comedians of our time. Best known for whimsical roles in comedy films like Mrs. Doubtfire and Good Morning, Vietnam, he touched the hearts and funny bones of all who saw him perform. While he was regarded as one of the funniest comedians of our generation, his personal life didn't always match his happy-go-lucky portrayal in feature films. Robin Williams took his life on August 11, 2014. Today, on the fourth deathiversary of  Robin Williams' tragic death, we're remembering his exuberant personality and the wonderful legacy he left behind.

"Death – to blink for an exceptionally long period of time."


Robin was born on July 21, 1951, in Chicago, Illinois, to parents Robert Fitzgerald Williams and Laurie McLaurin. He was raised Episcopalian, and kept his faith throughout his life.

"My childhood was really nice. My parents never forced me to do anything; it was always, "If you want to do that, fine." When I told my father I was going to be an actor, he said, "Fine, but study welding just in case."

The youngest of three, Williams learned at an early age he could use humor to get attention. Though he was a shy child, joining high school drama productions brought him out of his shell.  Williams attended several high schools around the country in Illinois and Michigan until his family finally relocated to Tiburon, California, when he was 16 years old. He graduated Redwood High School in 1969, where his classmates voted him "Funniest" of the class. 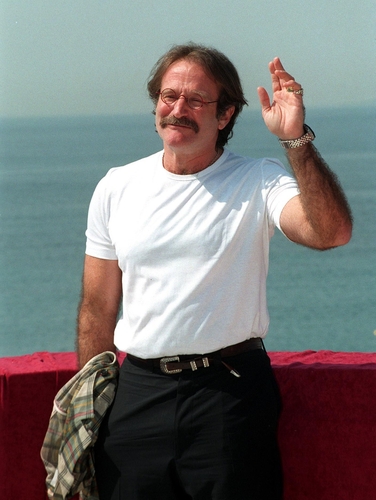 
Following his high school graduation, Williams had a brief stint studying political science at Claremont Men's College, but quickly dropped out to pursue acting. In 1973, he received a full scholarship to the world-famous performing arts university Juilliard and was only one of two to be invited to participate in the Advanced Program. All of Williams' professors at Julliard were astounded at his innate ability to perform. His dialects teacher was blown away when he could speak in several accents without prior practice. Williams, however, never graduated from Julliard. He left in his junior year when professors told him that there was no more the school could possibly teach him and that it was far too conservative for his lively, zestful personality. 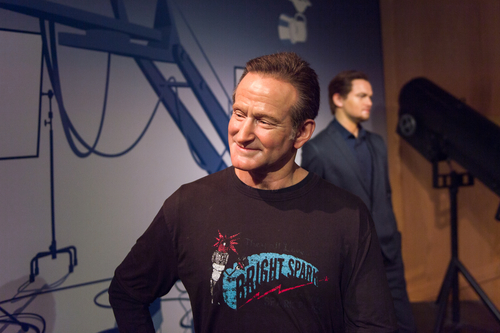 "There's three things in this world that you need: Respect for all kinds of life, a nice bowel movement on a regular basis, and a navy blazer."

Upon leaving Julliard, Williams returned to California to try his hand at stand-up comedy. Williams studied several of his favorite comedians during this time, including Jonathan Winters, Sid Caesar and Jay Leno. Williams began playing shows at venues like The Comedy Club, LA Improv and The Roxy, which put him in the spotlight. His comedy routines soon became the talk of the town and he even won a Grammy Award in 1979 for a recording of one of his New York comedy shows.


Though he didn't fully stop performing comedy, Williams began to dabble in more official roles than stand-up. In the '70s, Williams starred in several popular shows including Happy Days and Mork and Mindy, which brought in over 60 million viewers weekly and truly catapulted Williams to stardom. Shortly after, he began to appear on late night talk shows, which meant positive exposure to an even larger audience.


While most recognize Robin Williams primarily as a film actor, his film career didn't start until 1980. He started out acting in low-budget films, but his big acting break came in 1987 when he starred in Good Morning, Vietnam. It was for this role that he was nominated for an Academy Award for Best Actor.

"I want to do a movie, but it has to be the right movie, whether it's independent or a studio movie. I'm much more open to being a supporting actor. At the age of 60, I'll be second fiddle. Fine. I'm happy to do it."

Following this breakthrough, Robin Williams was typecast as a funny but sensitive character. This persona brought him roles in films like Good Will Hunting, Dead Poets Society, and Hook. However, in his later acting career he did diversify the kinds of roles he accepted. In 1997, Williams won an Academy Award for Good Will Hunting. Robin Williams was also an accomplished voice actor. One of his most famous and beloved roles was as Genie from the Disney film Aladdin, for which he won a Golden Globe Award. 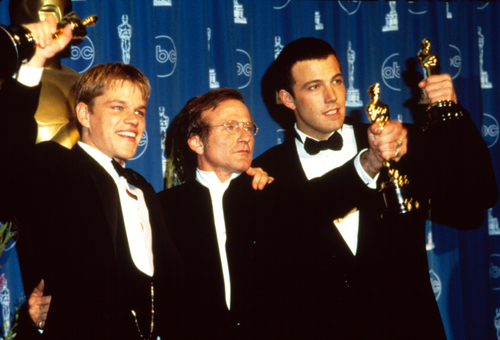 The price of a laugh


While the comedy world loved Robin Williams, it didn't always treat him well. The comedy scene offers both performers and audience members the chance to escape from life for awhile. Like many comedians, he began experimenting with drugs and alcohol, which impaired his abilities to perform well. His once happy-go-lucky routines quickly turned dark and sinister.

"You treat a disease, you win, you lose. You treat a person, I guarantee you, you'll win, no matter what the outcome."

His personal life was also quite chaotic due to his many tumultuous relationships, and struggles with mental health issues. During the '70s and '80s, Williams struggled with a cocaine addiction. While he managed to quit the drug for a long time, he began drinking again in 2003, and completed a stint in rehab for alcohol abuse in 2006. 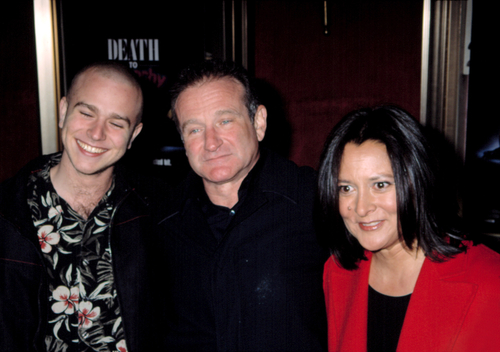 Williams married his first wife, Valerie Velardi, in 1978 but divorced her a decade later when their son, Zak, was five years old. The following year, he married his son Zak's nanny Marcia Garces, with whom he had two children, They remained married for 19 years.

"You're only given a little spark of madness. You mustn't lose it."

One year after his divorce to Garces was finalized in 2010, he married Susan Schneider, a graphic designer. Schneider and Williams were married until he passed away in 2014.


While the majority of Williams' career was comprised of comedy work, those closest to him said that he was plagued by mental health issues. He was often incredibly manic and switched rapidly from manic episodes to extreme shyness and vulnerability. His many quirks combined with a flair for entertainment meant many who knew him said that he was the most unique character they had ever met.

"You will have bad times, but they will always wake you up to the stuff you weren't paying attention to." 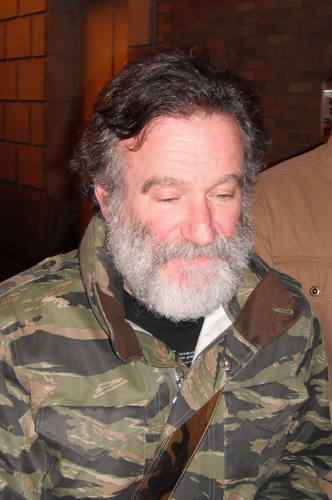 While Williams reportedly maintained his sobriety up until his death, addiction was not the only problem he faced. In the few years leading up to his death, Williams was diagnosed with severe depression and early-stage Parkinson's disease. An autopsy after his death revealed that he had not had Parkinson's, but Lewy body dementia, which could have attributed to his depression. He suffered from many unpleasant side effects from these illnesses, including anxiety, insomnia, memory loss and paranoia.

"Please, don't worry so much. Because in the end none of us have very long on this earth. Life is fleeting. And if you're ever distressed, cast your eyes to the summer sky."

On August 11, 2014, Robin Williams took his own life and was discovered in his home in Paradise City, California. His suicide is majorly attributed to his bevy of both physical and mental health issues. 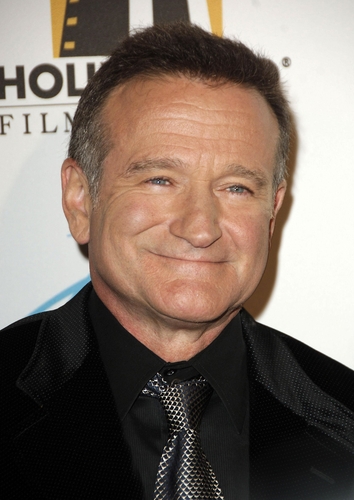 After his death, his body was cremated and scattered in the San Francisco Bay. Information about Williams' suicide was spread quickly in the media and to friends, family and fans alike. The whole world was shocked and saddened by Williams' unexpected suicide. His death refreshed conversations about the secretive nature of depression, and unhealthy stigma that surrounds topics of mental health.


Regardless of the illness that took Robin Williams life, he left a remarkable and positive impact on the world of performance. His legacy lives on in his children, loved ones and body of work. 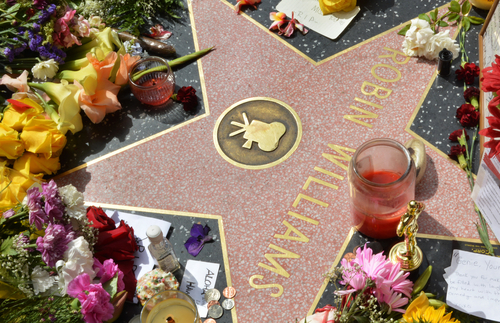