And I don't regret it 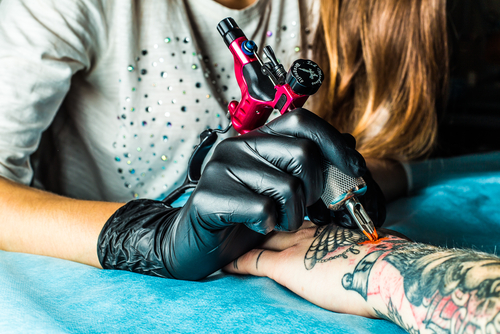 Memorial tattoos can be anything. A portrait of the person, their signature, a symbol or a meaningful quote are all ways to permanently memorialize someone in a tattoo. (Shutterstock)

Mom was known for her green thumb. She grew foot-long dinnerplate dahlias in a couple of converted barrels on our front porch every year. Her dahlias were so prominent that people came to associate them with her. Anyone who visited the house marvelled at the dahlias that thrived, and the woman who cultivated such beauty.


When she got sick, and the garden became our last priority, the dahlias bloomed on their own. They reminded me of who she was before her body started to vanish. Though I didn't know it yet, they were a reminder that she wouldn't end when her body died—her impact on earth, and me, would last.


Five years later, I wanted a dahlia tattoo. But I was torn.


I knew mom would hate it. She was adamant that tattoos were the grungy mark of the perpetually unemployed. Only recently have tattoos become a socially acceptable form of art and expression.


Tattoos weren't seriously on my radar prior to her death, because I couldn't imagine anything I could commit to for life. But years after her death, I was still thinking about the most poignant way to pay tribute to the woman who raised me—a dahlia tattoo. Meanwhile, a conversation from my early teens haunted me. We'd discussed this exact scenario, long before she ever got a diagnosis.

"What if I got a tattoo of something I would love forever?"


"What if I got a tattoo for you after you died?"

From her blistering reaction that day, there is absolutely no doubt in mind that she would be enraged and disappointed by my choice. And in a way, my dahlia tattoo dishonors my mother's wishes. She never wanted to be memorialized in a permanent way via the skin of her daughter.


I got one anyway, and I don't regret it.


Going your own way


Part of grieving a parent as a young person means becoming your own parent. At 20 years of age, it was up to me to make my own rules and boundaries. It was up to me to make mistakes and test my abilities. There came a point when I realized I needed to stop living life the way I thought my mom would have wanted, and instead live it my way. Getting the tattoo wasn’t my way of rebelling against a dead woman. I moved on with a sense of self that wasn't completely dictated by her. It was my way of saying I am my own person because of you, and in spite of you.


With living parents, that's just a normal part of moving into adulthood. You negotiate new boundaries as your parents become less a part of your decision-making process.


Getting a tattoo isn't the only—or best—way to memorialize someone by any stretch of the imagination. However, there are some benefits to this kind of tribute, for those who are considering it:


There are reasons not to get a memorial tattoo. Some of the warnings by my mom still hold true today. If you work in an industry that has not yet accepted tattoos, it might be prudent to avoid getting one on a very visible part of your body.


You should be fairly confident that you'll enjoy your tattoo for the rest of your life. Most people who get tattoos end up loving them more and more as the years go by.


If your relationship with the deceased person was rocky, a permanent tattoo might not be the way to go. If you have any inkling that your feelings about the deceased person could change dramatically, there are other more traditional ways to memorialize a person's life that won't require surgical intervention to reverse.


If anything about the idea of getting a tattoo gives you pause, it's best to wait until you feel fully confident. When I was waffling over this decision, a friend told me: "Tattoos are really the least permanent form of art—they only last as long as you do." Having recently struggled through many revelations about mortality and the tenuousness of life, I realized that a tattoo isn't really that permanent at all.


Yes, tattoos are painful. For most, this pain is very tolerable. The first few moments are usually the most painful and then a kick of adrenaline will carry you through, depending on the size and location of your memorial tattoo.


My dahlia tattoo hurt. But the pain of memorializing my mother was nowhere near the emotional pain of losing her. It was worth the brief discomfort for a lifetime of bringing mom with me everywhere I go.


I write a lot about honoring your deceased loved one's wishes as closely as possible. It's important to give deceased people the respect of following their end-of-life orders and memorializing them as they have asked. But does that extend to your own body? At what point do you have to separate your living self from someone who is no longer here? Sometimes honoring someone means growing up, becoming self-sufficient and living your best life.


I didn't get my tattoo for my mom. I didn't get it to intentionally disobey her. I got it for me. To me, the dahlia represents the grief I carry through life, and reminds me of my mom.