The Best Medicine: Laughing in the Face of Death

Using humor to cope with grief 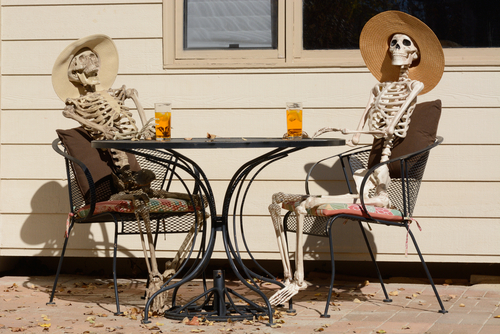 Gallows humor is is a type of comedy that pokes fun at death. Though it's not for everyone, there are many benefits to laughing in the face of death. (Shutterstock)

The irreverent cackle of one who has recently lost a loved one is a beautiful sound.


As soon as the funeral was over, I looked at my 16-year-old sister and said, "I'm your new mother now." My family was horrified, but she and I shrieked with laughter. She was the only one who could know exactly how I felt, the only one who was raised with the same twisted, dark humor. Funeral guests looked on with startled sympathy. But after a day of tears, condolences and hints that I should give up my schooling and career to take care of my sister, it was the first time I felt like myself again.


Finding power in the irreverent


Dark comedy is a style of mockery that takes aim at subjects that are considered taboo. Instead of avoiding uncomfortable or upsetting topics, dark humor seeks to expose and mock the things we fear the most. By targeting subjects that are graphic, disturbing and vulgar, it's possible to gain power over issues that challenge us.

My dad died when we couldn't remember his blood type. As he died, he kept insisting for us to "be positive," but it's hard without him.

Within dark humor, there is the more specific gallows humor, which refers to black comedy aimed at all topics related to death. Joking about death, while irreverent, is not a new way of coping with mortality. This may not be for everyone, but humans have found comfort in irreverent humor for thousands of years.

I saw an ad for burial plots, and thought to myself this is the last thing I need.

Why do we laugh when we're uncomfortable?


Nervous laughter is different than using dark humor to cope with loss. The first time I donated blood, I exploded into a twittering giggle as I watched the thick needle move closer to my arm. It wasn't the laugh of reclaimed empowerment, but of fearful anticipation. Drenched in a cold sweat, something primal was causing my joyless laugh.


This weird sensation is a natural response to alarm, embarrassment, confusion or fear. It provides an outlet for tension, but doesn't offer the same relief as a full belly laugh.

It used to be only death and taxes were inevitable. Now, of course, there's shipping and handling, too.


There are many reasons to laugh. Emotionally, mentally and physically, laughter truly is the best medicine. Here are some of the reasons to laugh through your grief, without feeling weird about it:


On its own, laughter is not a cure-all for depression, anxiety or bereavement. However, allowing humor to break the monotony of the day to day or interrupt negative thoughts is extremely beneficial.


Allowing yourself to express joy not only reaps physical and mental benefits, but social ones as well. Those who laugh often are more likely to bond with others, and attract new connections. Isolation is a grave concern during times of bereavement, so drawing closer together with loved ones is an extremely healthy and productive way of beating the blues.


Particularly between those who share the same loss, a dark joke can be tender, abrasive, sentimental and dismissive all at once. The person you are mourning also had their own views about death, and remembering their stance on funeral etiquette, mourning and death. You and other survivors may be able to see irony in the death and handling of the memorial that is humorous—this is not only completely fine, but also very healthy!


Death is mysterious. Though many people have convictions about where souls end up once they leave our bodies, or even whether or not souls exist, the truth is that there are many questions surrounding the afterlife and the divide between life and death. Because death is enigmatic, many are uncomfortable discussing it.


But bringing difficult topics to light and giving them names is important. By investigating death, you might discover that what lurked in the darkness actually wasn't as scary as you thought.


Making light of death is not the same as taking life for granted. In fact, those have experienced grief and trauma are often the first to joke about it. Being able to release pain through laughter can be tremendously cathartic and empowering.

I'm not saying your perfume is too strong. I'm just saying the canary was alive before you got here.

According to most studies, people's number one fear is public speaking. Number two is death. Death is number two. Does that sound right? This means to the average person, if you go to a funeral, you're better off in the casket than doing the eulogy.

As beneficial as dark humor can be, not everyone gets it. If the joke is extremely morbid, it's best to reserve your darkest bits for those who understand the pain and irony. Those who overhear a dark joke might mistake it for rudeness, malice or even violence.


It's not just a matter of offending someone: For those who are grieving, making light of death can cause real emotional pain. You can't always get everyone on your level when real tragedy has struck, so it's best to be tactful and discreet when bereavement is fresh.

Related Blog Posts
Is it Normal to Feel Relieved After a Death?
Yes — and it's linked to guilt, too
The Best Medicine: Laughing in the Face of Death
Using humor to cope with grief
Coping With the Loss of an Infant
Grief, coping, and setting boundaries with others following the loss of a child
I Asked 'What's Inside an Urn?' — And Got a Faceful of Dust
Why handling remains isn't all that bad
See all
Having trouble writing an obituary? Try our free interactive obituary template.

Get started for free
Discover our blog
Is it Normal to Feel Relieved After a Death?
Yes — and it's linked to guilt, too
The Best Medicine: Laughing in the Face of Death
Using humor to cope with grief
Coping With the Loss of an Infant
Grief, coping, and setting boundaries with others following the loss of a child
I Asked 'What's Inside an Urn?' — And Got a Faceful of Dust
Why handling remains isn't all that bad
View more