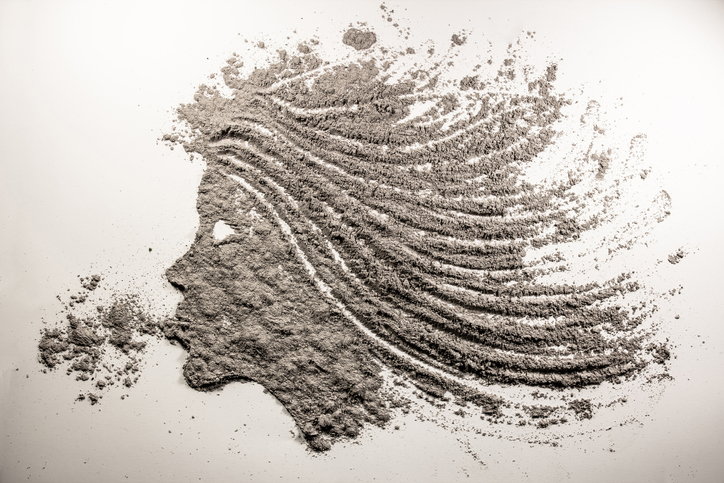 Most people are averse to touching human remains. But cremains are harmless, and can teach us a lot about grief. (Getty Images)

I opened my mom's urn and got a lungful of cremains. For years I was ashamed of this moment—until I discovered that curiosity about remains is not only normal, but healthy.


I never thought I'd be the type of person to display an urn on my mantle, but I was wild with grief when I decided to purchase the tiny silver vault. We always knew mom would be cremated—she insisted on it even before she got sick. The ashes were to be spread at our family home.


But funeral decisions are a one-time deal, and I was worried about regretting not saving a piece of her. I knew if I changed my mind about spreading all her remains, I'd have to transfer them into another container myself. Whatever was in the urn, I didn't want to see it, and certainly didn't want to touch it. Buying a keepsake urn meant I wouldn't have to get up close and personal with my dead mother's cremains.


The main urn was larger, and contained the bulk of her cremains. We intended to spread those ashes in a natural place so we could visit her. But I had no idea what to do with this keepsake urn. I stashed it in a cupboard in my room for a couple months.


Those months were messy. I was already used to the sudden bouts of sobbing—that had been happening ever since her diagnosis. But once she died, it was less crying and more guttural howling. Silent screaming followed by hyperventilation and a death wish. These episodes descended upon me without warning and departed just as quickly, leaving me feeling unbalanced and sick. Fearful that my next panic attack might happen in public.


Probably one of the most common misconceptions about grief is that it is synonymous with sadness. You expect to cry when a loved one dies. You expect to be despondent, depressed, unreachable. That's just the tip of the iceberg.


Grief is different for everyone. Some need time away from their responsibilities in order to recover. Others crave distraction, relying on the stability of regular life to carry them through the storm. Contrary to claims of armchair psychologists, the five stages of grief do not progress in any linear fashion. Denial, anger, bargaining, depression and acceptance can happen in any order, all at once, simultaneously, back-to-back and sometimes people even get stuck in one stage for months or years. Basically, everyone is different. The only common denominator in grief is that you can't anticipate what it will do to you. All you can do is accept that everything is going to be bananas for awhile, and try not to judge yourself too harshly.


What's inside an urn?


During one grief meltdown, I opened the cupboard and held my mom's small urn in both hands. I wish I could tell you what I was thinking in that moment, but all I remember is visualizing what was inside. Just ash? Or bone? Teeth?


I unscrewed the top and pulled it away. Did you know that the lids on urns are hollow?


Poof! Ash all over me, my bed, my room. Even a tiny urn can house a lot of dust, and a decent amount of it went straight up my nose and into my mouth. Turns out, they really load up urns with as much of your loved one as they can pack in! That hollow lid was full of mom, and I just poured her on most of my bedding.


Turns out, cremains are just chalky, gravelly grey sand. When a body is cremated, there are bones and larger chunks of remains. However, these are mechanically granulated before being placed in an urn. The lack of distinct bone fragments was both a disappointment and a relief. My morbid curiosity was killed by the discovery that bone dust, like glitter, goes everywhere.


Why are we ashamed of death?


Hacking, crying, gagging, I raced to tighten the lid of the keepsake urn. But the damage was done. As I stripped my bed and wiped my mother off of every surface, I contemplated the poor design of my keepsake urn. And as I showered, I was ashamed that I'd opened the urn in the first place.


Self-disgust, shame and guilt. This is grief. Suspicion that you're grieving wrong. Fear that your curiosity about death is abnormal or sick. Worry that everyone thinks you're losing your grip, as you see yourself doing things you'd normally consider to be pretty unhinged. Grief means temporary insanity. You're an unpredictable version of yourself. Even if you can continue with your day-to-day responsibilities, nothing makes sense.


There is also a unique sense of shame that comes with handling a dead body. Even though human bodies begin to decompose almost immediately after death, cadavers actually pose less of a health risk than living people. A body is a reminder that life is finite, that we all decay. Even when a body has been embalmed to a lifelike condition, there's no mistaking that something is now 'gone'.


Death, cadavers, grief, and funeral home practices are taboo subjects in western culture. Perhaps because grief is painful, and bodies are unpleasant, there is a culture of silence and shame that surrounds death-related issues.


Getting up close and personal with death


Death positives believe that getting up close and personal with all aspects of death can help us overcome fears of death and bodies. By openly discussing death, we can improve the quality of death care, move through grief without sacrificing mental health, and give our dead proper goodbyes—without shame. Curiosity about death is as harmless as a dead body.


In fact, the fourth tenet of the death positivity movement says:

"I believe that the dead body is not dangerous, and that everyone should be empowered (should they wish to be) to be involved in care for their own dead."


— Order of the Good Death

Death positivity is not a prescriptive set of rules, but rather a list of principles to be taken as ideals. A death positive person does not have to be comfortable viewing a loved one's body. There's no need to be involved in handling remains, but in principle everyone should be empowered to do so if they wish. It was not at all my wish to handle my mother's remains. But getting a faceful of dust was what I needed to accept her death.


From that day on...I continued to grieve the same as before. The whole next year was brutal. Opening an urn is not a cure-all for bereavement. But I knew that the urn contained only dust.


Inhaling your mom during a moment of weakness is gross (take it from me), but it's also pretty normal. Turns out, ashes are safe. You can touch them, breathe them and even choke on them and live to tell the tale.


About a month later we spread most of her ashes outside in her garden. This time, I was unbothered by my mother's remains making their way onto my hands and clothing. As a heavy breeze blew more of her into my hair, ears, mouth and eyes, I wasn't afraid of seeing bones anymore.

Related Blog Posts
The Best Medicine: Laughing in the Face of Death
Using humor to cope with grief
Coping With the Loss of an Infant
Grief, coping, and setting boundaries with others following the loss of a child
I Asked 'What's Inside an Urn?' — And Got a Faceful of Dust
Why handling remains isn't all that bad
How to Avoid Crying at a Funeral
Tips for delaying your tears while in public
See all
Having trouble writing an obituary? Try our free interactive obituary template.

Honoring our dead with respect to the earth
See all
Your loved one had a remarkable life. Tell their story, and we’ll publish it online for free.

Get started for free
Discover our blog
The Best Medicine: Laughing in the Face of Death
Using humor to cope with grief
Coping With the Loss of an Infant
Grief, coping, and setting boundaries with others following the loss of a child
I Asked 'What's Inside an Urn?' — And Got a Faceful of Dust
Why handling remains isn't all that bad
How to Avoid Crying at a Funeral
Tips for delaying your tears while in public
View more