How to Avoid Saying 'Dead'

The case for embracing the D-word 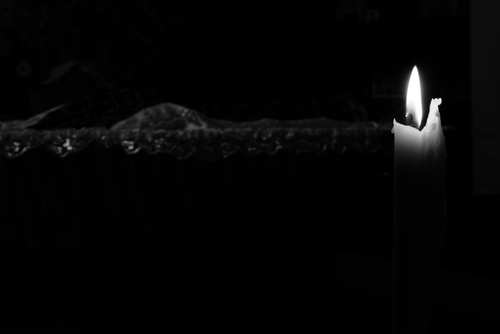 There are many different ways to avoid saying dead, without completely obscuring the news with euphemisms. (Shutterstock)

One day my mother called us to her and said she had news. She'd been battling cancer for months, and we were hopeful for remission.

She introduced me then to the colorful world of avoiding the four D-words: Death, Deceased, Dying and Dead. Instead of delivering this horrific news directly, she did it with a twisted grin—the smile only a dying person can have in relation to her own demise.


Most people don't have this perspective on death, and do just the opposite when addressing the topic. Instead of making it sound awful, they dance around the subject, use vague references to sleep and God, make hand gestures or grimace at you...all to avoid the unpleasantness of a D-word. But why? After all, everyone's going to croak eventually.


Euphemisms sell the bad as good


There's a euphemism for every tough thing out there. When it comes to death, there's nothing but ambiguity. Calling something as final and tragic as death by any other name can mitigate pain for those still caught in initial grief stages of shock and denial.


Stating the bald truth is hard, but sometimes being direct is the best way to deliver tough news. Most people are in a state of shock and disbelief when they are first notified of a death.


Last year a friend called to tell me our mutual acquaintance was 'gone.'

Using a euphemism, such as 'gone' does not do enough to accurately convey what has happened, and ultimately causes more confusion and pain than it spares feelings.


If you are strongly opposed to using the word 'dead,' I challenge you to ask yourself...why?


The word can carry a lot of baggage for folks who are unable to confront the inevitability of death. Especially for those who've never experienced a significant loss, the word has a nebulous, overwhelming meaning, while also seeming too strong, too final.

"Fear of a name increases fear of the thing itself."

'Dead' means exactly what it says. Death is awful, final and incomprehensible. But use the word. There's no better one.


That said, when I've been tasked with the unfortunate duty to inform folks of a death, I do soften the blow by using the passive tense. Instead of saying 'Joe is dead,' try the gentler 'Joe has died.' It leaves no room for ambiguity about what happened to Joe, and delivers the news with as much tact and thoughtfulness as possible.


If you're still dead set on avoiding the word 'dead,' here are some subtler ways to refer to death. These terms convey that death has occurred, while also not explicitly saying so. 'Passed away' is the best of this list; the others are oddly formal for a conversation.


Don't compare death to sleep. It's confusing, unhelpful and just plain wrong. Saying a dead person is 'just sleeping' ultimately does little more than underscore the difference between sweet repose and the absolute, irreversible nature of death.


Using this comparison when describing death to children does not help them understand the concept any better, and can even lead to fear of sleep and other emotional struggles.


Exploring the concept of death absolutely brings its share of difficulty and existential thoughts. Once these are resolved, understanding of death is rooted in reality.


Whether you're religious or not, it's undeniable that the phrases 'going home,' or 'with God' hold multiple meanings. When you frame death as a 'homecoming,' you risk confusing others, or causing them pain.


It's a wonderful thing to be comforted by the thought of of a deceased person resting in heaven. But when you are discussing death, it's valuable to be clear. Religious euphemisms are only useful when you know everyone in the conversation is coming from a similar religious background.


Purposefully selecting the worst words to use in place of 'dead' is also not recommended. When you make the choice to use dysphemism for death, you risk coming off as extremely callous. Don't be careless and heartless in the presence of mourners, unless this dark sense of humor is shared by all present. If you're the one dying though, say it however you like! 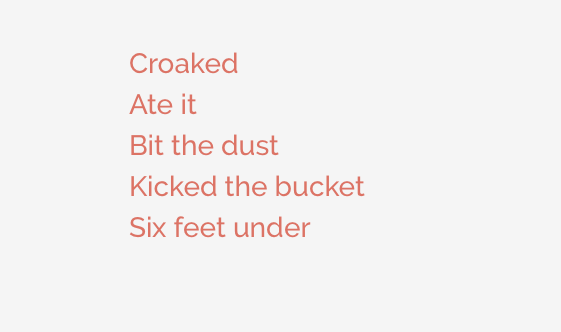 
Tailor the way you express hard topics to the person you are speaking with. It's polite to to be gentle when discussing death, especially with folks you don't know well, or who are recently grieving. However, it's important to remember that the more you dance around saying 'dead,' the higher the risk of garbling the message. For example, saying someone has 'expired' is reminiscent of a carton of yogurt that has passed its freshness date. 'Sleeping,' 'eternal rest,' 'homecoming' and 'out of pain' don't do enough to convey an important and urgent message: someone important has died and they are not coming back.