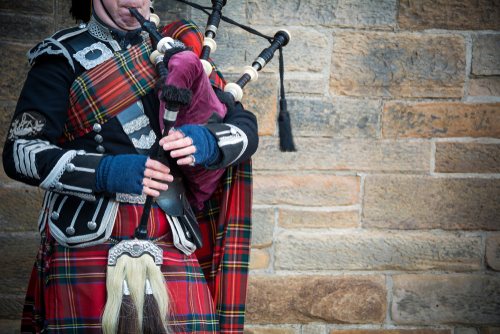 Consider hiring a piper for your loved one's memorial music. There are several traditional songs for bagpipes to play at a funeral. (Shutterstock)

If you've ever heard bagpipes played at a funeral, you know just how stirring the sound can be. Some prefer bagpipe funeral songs because the instrument itself is a symbol of remembrance and mourning. However, others who are of Irish or Scottish heritage may opt for bagpipe funeral songs as a way to tie themselves to their heritage, as the bagpipes are a traditional instrument in that part of the world.


Why are bagpipes played at funerals?


Bagpipes have long been the primary instrument of funerals honoring firefighters and police officers. During the 1800s, the potato famine of Ireland brought hordes of Irish immigrants to North America. They faced discrimination, and were only allowed to work in dangerous professions-like police and firefighting. The death toll was high enough in the Irish-American community that their tradition of playing bagpipes at funerals became inextricably linked.


Even if it's not your favorite instrumental sound, there's no denying that bagpipes are especially affecting in the context of a funeral.


This funeral trend has spread to include memorials of all types. Though bagpipes are most often linked to funerals of military members and first responders, anyone can take advantage of this haunting and emotional tribute.


If the choice has been made to incorporate the bagpipes into a funeral, the next question may: Which songs should be played? There are several common funeral songs played on the bagpipes. Here are some songs that you might hear at a funeral.


For religious services, "Going Home" is one of the most popular funeral songs. The Christian ideal of returning to God in heaven at the time of death is a theme in this adapted classic from Dvorak's Symphony No. 9.


It can be comforting to believe that, though they are gone from earth, deceased loved ones are waiting to be reunited with us in heaven. Now that the deceased person's work on earth is complete, they can finally rest. "Going Home" is a reminder that everyone will eventually pass away, but this is a natural end to a life well lived.


Jesus is the Door;


Work all done, laid aside,


Fear and grief no more.


Friends are there, waiting now.


He is waiting, too.


See His smile! See His hand!


He will lead me through.


Every tear wiped away,


Wide awake there with Him!


Peace goes on and on!


See the Light! See the Sun!

Flowers of the Forest


"Flowers of the Forest" is a Scottish folk song that dates back to about the year 1615. This tune was written to memorialize the defeat of the Scottish army at the Battle of Flodden in 1513. The melody is ancient; however, there are several versions of the lyrics, all more recent than the original composition.


It's a somber song that is generally reserved for solemn occasions, like a funeral. In fact, many pipers will only play Flowers of the Forest during funerals or when practicing for playing for funerals.

I've heard the lilting, at the yowe-milking,


But now they are moaning on ilka green loaning;


"The Flowers of the Forest are a' wede away".


Another Scottish funeral standard is "Skye Boat Song." This song was first played in the late 19th century, and is a meaningful song for memorializing someone who has passed, especially a Scot.


This tune recounts the story of Bonnie Prince Charlie's escape after the Jacobite rising of 1745:

Speed, bonnie boat, like a bird on the wing,


Carry the lad that's born to be King


Over the sea to Skye.


Baffled, our foes stand by the shore,

Many's the lad, fought in that day


Well the claymore did wield;


When the night came, silently lay

Though the waves leap, soft shall ye sleep,


Rocked in the deep, Flora will keep


Watch by your weary head.

Burned are their homes, exile and death


Yet ere the sword cool in the sheath

Pipers may choose to play "Skye Boat Song" at a funeral as the lyrics reflect a journey over sea and sky. Though the song is literally about an escape, in the aftermath of a death this song tells the story of an amazing person who is moving on into another world, which can be very meaningful to mourners at a funeral.

Oft in the Stilly Night


"Oft in the Stilly Night" is a poem written by Thomas Moore (1779-1852), which is also played as a song. The speaker reflects on boyhood and draws comparisons between memories of the past and the present day. Nostalgia, fear of death and taking a moment to reflect on life are all ideas explored by Moore in "Oft in the Stilly Night":

Oft, in the stilly night,


Ere slumber's chain has bound me,


Of other days around me;


The smiles, the tears,


The words of love then spoken;


The eyes that shone,


Thus, in the stilly night,


Of other days around me.

When I remember all


The friends, so link'd together,


I've seen around me fall,


Whose lights are fled,


And all but he departed!


Thus, in the stilly night,


Ere slumber's chain has bound me,


Of other days around me.

Moore's poem, when translated through the bag of a pipe, evokes a yearning to remember the past. It's a beautiful way to memorialize a loved one on the day they are laid to rest. 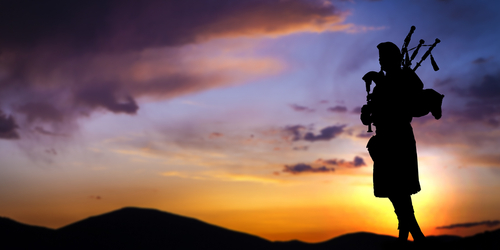 
"Amazing Grace" is a traditional funeral song that holds meaning for many people. Though it was written more than 200 years ago, the lyrics and melody still resonate with folks from all over the world. This song has been reimagined in many ways, by countless artists. It remains an incredibly popular song and is often sang at traditional church services on Sunday mornings.


The timeless ditty speaks about a deep faith and love for God, which can be of special importance if the deceased was religious. Despite the slow, somber melody, the lyrics are full of hope. This emblematic hymn is a favorite across cultures, continents, generations and languages.

Amazing Grace, How sweet the sound


I once was lost, but now am found


T'was blind but now I see


T'was Grace that taught my heart to fear


And Grace, my fears relieved


How precious did that grace appear


The hour I first believed


Through many dangers, toils and snares


We have already come.


And grace will lead us home,


And grace will lead us home


Amazing grace, How sweet the sound


I once was lost but now am found


T'was blind but now I see


"Danny Boy", written by Englishman Frederic Weatherly in the early 20th century, is a touching song choice for funerals, especially when piped. It is an Irish folk song set to the tune of "Londonderry Air," and has a strong connection with Irish and Scottish communities. Despite this, it is played at funerals of varying nationalities. "Danny Boy" is frequently chosen for several reasons, not least of which is its deep and emotional message. It is also a song that celebrates bagpipes, as well as laments the loss of life.


From glen to glen, and down the mountain side.


The summer's gone, and all the roses falling,


But come ye back when summer's in the meadow,


Or when the valley's hushed and white with snow,


It's I'll be here in sunshine or in shadow,


But when ye come, and all the flowers are dying,


You'll come and find the place where I am lying,


And kneel and say an Ave there for me.


And I shall hear, though soft you tread above me,


And all my grave will warmer, sweeter be,


For you will bend and tell me that you love me,


And I shall sleep in peace until you come to me!


This song is known as an unofficial Scottish anthem. Though it is not explicitly a funeral song, it is a beautiful addition to the musical program at a memorial service-particularly when laying to rest a person of Scottish heritage.

Hark where the night is falling


hark hear the pipes a calling


Loudly and proudly calling down thru the glen


There where the hills are sleeping


Now feel the blood a leaping


High as the spirits of the old highland men


Land of my high endeavor


Land of the shining river


Land of my heart forever, Scotland the Brave


High in the misty mountains


Out by the purple highlands


Brave are the hearts that beat beneath Scottish skies


Wild are the winds to meet you


Staunch are the friends that greet you


Kind as the love that shines from fair maidens eyes.


Many folks opt to include the chilling sounds of a bagpipe in funerals, and it's not all about heritage. Something about this instrument is larger than life. Keep in mind that everyone at the funeral is there to celebrate the life of the deceased. The song choice may seem important now, but what truly matters is the reason why everyone has gathered. The sheer volume and impact of this musical tribute is enough to command the attention of all mourners present.


Check out these songs and other in our Bagpipe Funeral Music playist on Youtube: