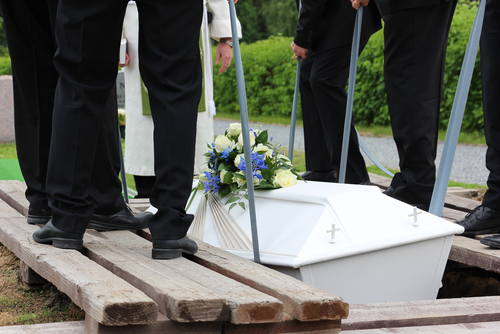 Pallbearers putting down a coffin at a funeral. (Shutterstock)

The role of pallbearer is a ceremonial funeral tradition in which a select team of mourners carries the casket and the deceased to the final place of rest during a funeral. Pallbearers are integral to a funeral that includes a funeral procession, graveside service, or any movement of the casket during the service.


What does it mean to 'bear the pall'?


The word pallbearer refers to an individual who attends and carries a casket during a funeral. A pall is the cloth that is spread over a coffin during a funeral. The term itself dates back to Ancient Rome, when soldiers would wear a pallium, a type of cloak.. But the tradition of draping funeral cloth likely originated sometimes during the Middle Ages. Pallbearers would attend to one of the four corners of the pall:

According to some accounts, pallbearers held the pall in place as other men or a vehicle bore the casket to a church. Others indicate pallbearers carried the pall into a church and ceremonially touched or held it during a service.

Today, pallbearers are usually close friends or relatives of the deceased. These mourners are entrusted to bear the casket containing the body of the deceased into the funeral, and to the gravesite to be buried.


Both men and women can act as pallbearers, as long as they conduct their duties with respect, dignity, and strength. A pallbearer's primary duty is to safely carry the casket containing the deceased, with the help of 4–6 other pallbearers, to the hearse, funeral home, and gravesite.


Most graveside services don't require pallbearers to lower the casket into the grave. After the pallbearers deliver the casket safely to the site, the cemetery grounds staff is responsible for lowering and burying it. Caskets are lowered using a lowering device.


Pallbearers are expected to be attentive to the casket, as well as the grieving family. As close loved ones of the deceased and their family, pallbearers can make themselves helpful by offering assistance with any issues that may arise on the day of the funeral.

Funeral etiquette varies from family to family. Where casual, celebratory memorials may be appropriate for some, others prefer more traditional or religious bereavement customs to get through a death. All styles of mourning are valid, but it's best to err on the side of caution if the tone of the funeral and family is not known.

Pallbearers set the tone for attire at the funeral service. Their outfits must match the tone set by the hosting family. This role sometimes involves dressing a touch more formally than the average guest. At most North American funerals, this means black, formal, discreet, and tidy attire, like suits. If the host makes alternate attire requests of the pallbearers, these wishes should be carried out.

Pallbearing is an honored ceremonial funeral role that requires inner and outer strength. They are expected to remain calm and collected as they carry out their duties. Mental and emotional fortitude is required to brave the funeral in this distinguished role.

A pallbearer should be respectful and approach their role with dignity and grace. The best pallbearer is someone who can listen and take directions well. A good pallbearer knows how to remain calm and present amidst sorrow and grief.

A pallbearer should avoid laughing or speaking loudly, and behave in a respectful manner throughout the course of their duties. After the funeral, at the reception, there will be time for the pallbearers to join guests to remember and celebrate the deceased's life in a more casual and personal manner.

Walk slowly, steadily, and sturdily. Keep a strong and stable grip on the casket, always moving deliberately and with great concentration. The job of a pallbearer is not only to carry the casket safely from place to place, but also to convey to mourners that the deceased is being respected during this process. Avoid sudden or jerky movements, and let everyone rest assured that the casket will not be dropped or disrupted during the funeral.


A pallbearer should conform to the somber demeanors of other mourners in attendance, although they are also expected to show emotional resilience during the course of their duties. In some cultures and regions (in Ghana, for example), pallbearers express more positivity and joy, so it's important for pallbearers to understand expectations beforehand.


Anyone who is able to safely lift, carry and stabilize the casket can take on the role of pallbearer. Close friends, siblings, cousins, nieces and nephews are often the ones to take on this duty, but anyone who was close to the deceased can become a pallbearer.


The ability to lift and carry should not prevent a special loved one from fulfilling pallbearer duties. Many funerals include 'honorary pallbearers' who assist the funeral procession along with the other pallbearers.


Pallbearers are usually listed by name in the funeral program, and sometimes in the obituary notice too. Be sure to include their names in these written accounts of the funeral, as these documents are often used for family history research.


Thinking of writing an obituary in honor of a loved one? Beyond the Dash online obituaries are free to publish, and include a complimentary guest book.

Related Blog Posts
All About Pallbearing: Exploring the Origin, Duties, Selection and Etiquette of Funeral Pallbearers
An honored ceremonial funeral role that ensures dignity to those who have passed
What is a 'Witness Cremation'?
Involvement in the cremation process helps families say goodbye
What is a Graveside Service?
Accompanying your loved one to their final resting destination
What is a Green Burial?
Honoring our dead with respect to the earth
See all
Having trouble writing an obituary? Try our free interactive obituary template.

Involvement in the cremation process helps families say goodbye
See all
Your loved one had a remarkable life. Tell their story, and we’ll publish it online for free.

Get started for free
Discover our blog
All About Pallbearing: Exploring the Origin, Duties, Selection and Etiquette of Funeral Pallbearers
An honored ceremonial funeral role that ensures dignity to those who have passed
What is a 'Witness Cremation'?
Involvement in the cremation process helps families say goodbye
What is a Graveside Service?
Accompanying your loved one to their final resting destination
What is a Green Burial?
Honoring our dead with respect to the earth
View more