Who Gets the Flag at a Military Funeral?

Everything your need to know about military burial flag traditions 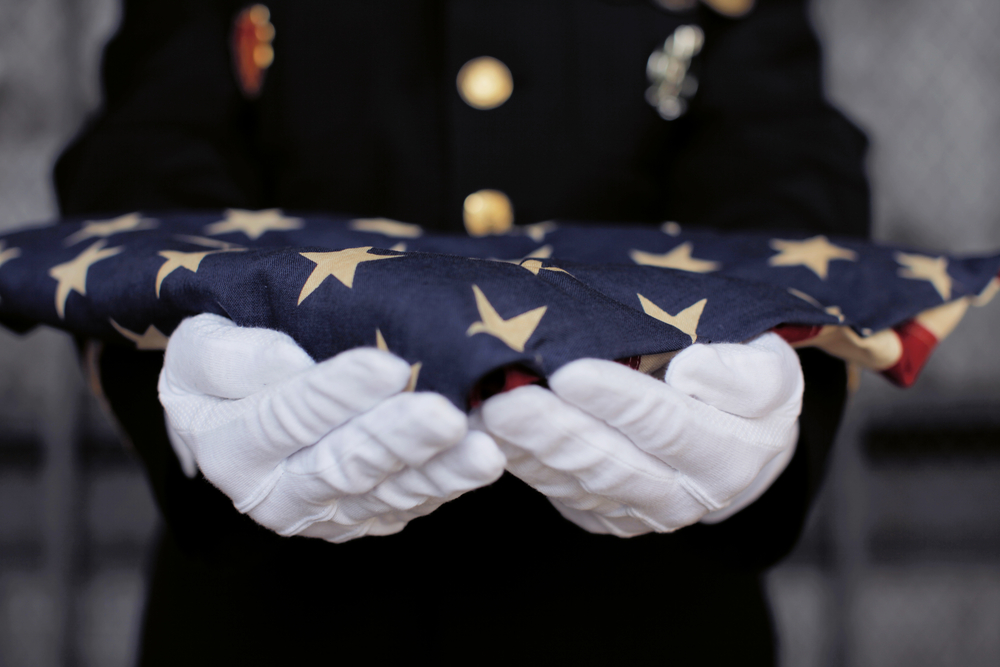 A military burial flag is provided to a deceased veteran in order to honor the memory of his service to the country. At the funeral, a folding ceremony takes place before the flag is presented to the next of kin. (Shutterstock)

A military burial flag is a gift to the family of the deceased veteran on behalf of the Armed Forces and President of the United States. It is a symbol of the honor earned, and sacrifice made, in battle while serving America.


The history of the military flag


Flags have long been a traditional part of military funerals. The tradition of draping the casket of the deceased veteran and presenting it to the next of kin dates back to the Napoleonic Wars. Soldiers who perished in battle were draped in the national flag. This tradition evolved over time to extend to the intricate folding ceremony that takes place in military funerals to this day. Around the world, flags are a meaningful part of the burial ceremonies of honorably discharged or fallen veterans. In the United States, when the flag is folded, the stars point upward to remind the people of the national motto, "In God We Trust." 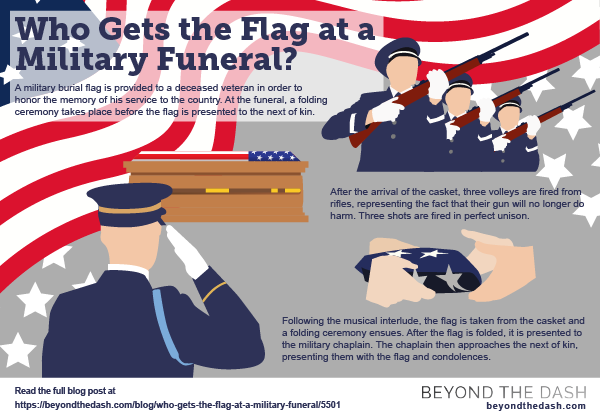 
If a life is lost in battle, military members are responsible for delivering the sad news. Designated notifiers visit the veteran's next of kin and offer the United States flag, along with the following words: "Your son fought bravely, please accept this on the behalf of the president of United States."


The military and family will jointly arrange for the funeral service, during which the military flag will be presented to the next of kin.


The flag itself is made of cotton and is not suitable for outdoor display. It is a decorative, symbolic token of services, to be cherished and preserved. The official, government-specified dimensions of the flag are 5'x9'.6".


Do all veterans receive a flag?


"VA will furnish a burial flag for memorialization for an other than dishonorably discharged:


Who is presented with the military burial flag?


At the funeral, the flag is presented to the deceased's next of kin. The next of kin is the person who is most closely related to the veteran. After receiving the flag, it is tradition among the family members to preserve for display in the house, usually in a frame. Some families donate or supply their flags when for national veteran events, such as Memorial Day.


How is the next of kin selected?


Active duty members appoint their next of kin prior to deployment. There is usually no dispute of who the flag recipient should be.


The line of succession


The following hierarchy is used to determine who should receive the flag in the event the designated next of kin is unavailable:

If none of these relatives are available to receive the flag, any other relative or close friend can receive the flag in accordance with the deceased's domicile certificate.


The military burial flag ceremony symbolizes the honor bestowed upon the dead, as well as the surviving family. Both the deceased veteran and the family have made a sacrifice for their country, and the ceremony honors that sacrifice.


The following traditions make up most notable parts of a military funeral service: 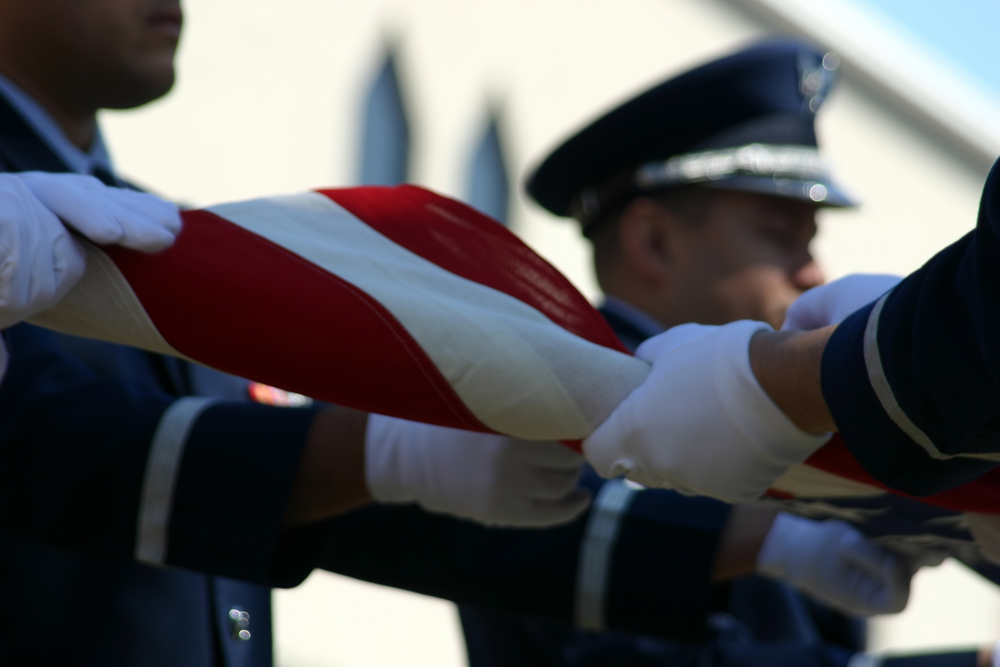 Who inherits a funeral flag?


Many people wonder what the line of succession is when the person who now owns the burial flag passes away. When a flag is presented to the next of kin in a military funeral ceremony, it is theirs to keep for life. They may give it away or bequeath it to any person they wish.


There are no special ownership laws when it comes to funeral flags. That means that if the person who owns the flag passes away, the flag does not continue to be passed down through deceased soldier's family. It legally will belong to the estate of the person to whom it was given at the funeral.


Presenting the military burial flag is one of the most sacred rituals on the day of a military funeral for the deceased veteran, as well as for the family. The flag is a lasting symbol of their sacrifice that will stay in the family forever.


No matter how long it has been, it's never too late to create a digital memorial in honor of a fallen hero. If you are thinking of a loved one who deserves a written tribute honoring their life and accomplishments, consider creating a memorial story on Beyond the Dash. It's free to publish online, and can be shared with family and friends for years to come.

Related Blog Posts
Is it Okay to Drink During Bereavement?
When to avoid, and when to indulge
"He's in a Better Place" and Other Things Not to Say at a Funeral
Rethinking the way we phrase condolences
Who Gets the Flag at a Military Funeral?
Everything your need to know about military burial flag traditions
How to Ask for Funeral Expense Donations
Tactfully requesting financial assistance for the memorial service
See all
Having trouble writing an obituary? Try our free interactive obituary template.

Get started for free
Discover our blog
Is it Okay to Drink During Bereavement?
When to avoid, and when to indulge
"He's in a Better Place" and Other Things Not to Say at a Funeral
Rethinking the way we phrase condolences
Who Gets the Flag at a Military Funeral?
Everything your need to know about military burial flag traditions
How to Ask for Funeral Expense Donations
Tactfully requesting financial assistance for the memorial service
View more