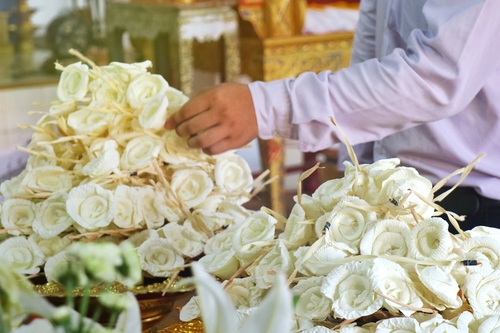 White is not usually associated with funerals in North America, but it has always been a traditional color of mourning across the globe. (Shutterstock)

When it comes to funerals, most people expect to wear black. Dark colors show deference to the family and sorrow over the loss. Gray, navy blue, and brown tones are all considered appropriate for memorials—but what about white?


White holds positive connotations. As a color that contains and disperses all other colors, many cultures have equated white with perfection. Purity, understanding, faith, goodness, and light are associated with this achromatic color. Because of the positive connotations, some folks have confused it for a joyful color.


Though a funeral is never a happy day, there is some joy in knowing that your loved one is experiencing resurrection in the afterlife or rest in death, depending on your beliefs. The positive feelings associated with white are not a celebration of the death, but rather a sign of respect for the life lost.


White is a color of mourning across the globe


Black is the traditional color of mourning across Europe and North America, but white has always played a role in bereavement. Clean, white shirts are usually worn with suits, and funeral flowers are usually white too. In Medieval times, white was worn together with black when honoring lost lives.


Buddhists wear white to funerals as a symbol of mourning, and respect to the deceased person. Believing that the first three days should be a period of positivity, so that the deceased can transition from life to death peacefully, Buddhists prefer to mourn in white.


White plays a more prominent role in funerals across other continents. It's the main color worn at Hindu funerals, as a show of respect and purity. Similarly, white is a customary funeral color in some Asian cultures, particularly in China and Korea.


As a neutral color, white should not be considered inappropriate at most North American funerals. Though you should ask the family hosting the service when in doubt, plain, neutral colors are generally acceptable for memorials. Wearing white in conjunction with other dark tones is absolutely appropriate. It is up to you to gauge whether a fully white outfit would be expected or appreciated, depending on the service.


Still not sure what to wear? Check out some of our other articles on funeral attire:


The Funeral is this Weekend! What Do I Wear?


What to Wear to a Winter Funeral


What to Wear to a Jewish Funeral

The "If and Then" stage
See all
Your loved one had a remarkable life. Tell their story, and we’ll publish it online for free.

NEW YORK — David S. Wyman, a leading scholar of the U.S. response to the Holocaust whose "The Abandonment of the Jews" was a provocative, bestselling critique of everyone...

BISMARCK, N.D. — George Sinner, the farmer-philosopher who served as North Dakota's governor during one of the state's roughest economic times, has died. He was...