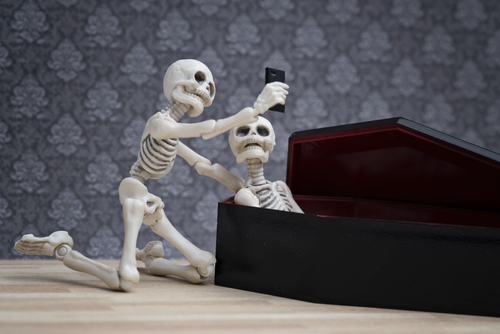 Funeral selfies sometimes include corpses. This disturbing trend disrespects the deceased person and mourners, and shows the world at the touch of a button. (Shutterstock)

In the Information Age, a picture can be snapped and posted online almost instantaneously. Hyper accessibility to digital communication tools allows us to stay connected to loved ones, navigate the world and find needed information on the fly. However, it doesn't leave much time for folks to think twice before sharing information.


Funeral selfies are the latest terrifying Instagram fad to sweep the internet.


What is a 'funeral selfie'?


Exactly what it sounds like. A funeral selfie is a selfie that is taken on the way to or from a funeral, or at the actual memorial service. They typically depict mourners, and include a funeral-related hashtag.


Thankfully, most funeral selfies are really just selfies, taken on the day of a funeral. They're inappropriate, and take the focus away from remembering the life of the dead person. But aside from being disrespectful and lacking taste, they're pretty harmless.


But not always. Which brings us to...


Corpse selfies are funeral selfies that feature the actual cadaver somewhere within the shot. It can be incredibly jarring to be scrolling through a sea of selfies on Instagram, only to discover a surreptitious body somewhere in the photo.


This is the absolute zenith of tastelessness. Here's three reasons not to post a funeral selfie with a corpse, ever.


1. It's disrespectful to the deceased person


Corpses don't usually look the way they did in life. Decomposition begins soon after death. Despite the use of modern embalming techniques, there is usually no mistaking a dead body for a living one.


When you snap a selfie with a corpse, you are showing the world a version of your loved one (or someone else's loved one) that can be disturbing to see. The dead person likely doesn't want to be remembered in this way, and mourners would more than likely prefer to forget the way the body looked. If you are at a funeral, your intention should be to show only your utmost respect, and taking a corpse selfie does the opposite.


2. It's hurtful to mourners


A dead body can't be hurt by a selfie. But funerals are for the living, and respect for the dead is often extended to the immediate family and closest friends. So, it's not appropriate to post a photo of a dead person in a public space where mourners could potentially stumble upon the image.


Casual scrollers will also find the image of a dead person disturbing. Don't be that person. Don't end up immortalized on a list like this.


Selfies get attention. But when you snap a corpse selfie, you're going to be disappointed in the kind of attention you get. It's an act that will spark anger and pain, and may just get you unfollowed and called out.


Why do people take funeral selfies?


1. To show off their outfit


Most funeral selfies are nothing more than ill-timed attempts at showing off formal clothing. Most folks don't dress up often, especially in such a formal, serious atmosphere. It's natural to want to take a snap when you're looking good, but funeral-related hashtags show your network that you're using a funeral to boost your image.


Plan a fancy night out, dress to impress and take all the selfies you want. Avoid taking attention away at a funeral.


2. To garner sympathy from their network


Posting about a loss on social media is a popular way of getting sympathy and support in bereavement. However, a selfie only serves to show this is more about getting attention than support.


Create an obituary to announce the loss instead of posting on social media. It will keep the focus on your loved one, and help you avoid looking tacky. Find a trusted friend to discuss your grief with, rather than posting a funeral selfie.


3. Because they can't stop taking selfies


Whether they're making dinner, at work, or on the toilet, some people have a selfie for every occasion. For these folks, documenting their every move is a daily habit. In these cases, the funeral selfie is just any other of the thousands they post constantly.


During bereavement, take some time to reconsider the funeral selfie. The funeral service is about the life of the deceased person, offering and receiving support, and paying respects.


Are funeral selfies ever okay?


Death photography is not a new thing. Families used to sit for portraits with their deceased relatives as one last chance to record them in physical form. If your family wishes to have a memento of this nature, it should not be taken in the form of a spontaneous selfie, and it should never be posted on social media.


If you need to take a selfie on the day of the funeral, save it for after the service.

The "&#%!@?!" stage
See all
Your loved one had a remarkable life. Tell their story, and we’ll publish it online for free.