During a funeral, the focus needs to be on the deceased and their family. Don't detract from the day by taking photos of the service. (Getty Images)

Humans are ardent recorders of happenings and experiences. Shortly after the introduction of photography, people began creating visual records of death. Post-mortem photography is not as popular as it once was, but still presents some etiquette challenges today, despite the ubiquity of photography with the advent of cell phone cameras.


In this article, we'll discuss the state of modern funeral photography, etiquette for taking photos at a funeral, and considerations to make before pulling out your phone during the service.


The state of modern funeral photography


There is still a place for funeral photography in modern-day North America, but this practice isn't often discussed publicly. Many people find the idea of photographing mourners as they communally grieve to be insensitive, while others prefer to capture the emotion of the day for later reflection.


As with weddings, funeral photography is a job for a professional. A professional photographer knows how to capture the spirit of a funeral service with discretion, sensitivity and respect for the family's wishes and instructions.


Snapping a quick pic at a funeral


Technology has changed all aspects of modern life. With a phone in your pocket, it's easier than ever to take a quick snap of anything from vacations to your lunch and instantly distribute that image on the internet, all at the touch of a button. Capturing images is routine for many people, but think twice before pulling out your phone at a funeral.


Considerations to make before taking a photo:

Privacy is important during a funeral. Many people do not expect to be photographed as they cry and express sorrow for a loss. When a professional photographer is responsible for capturing images, it is made clear by the hosting family.


This is an opportunity for everyone to express their bereavement, including you.

Looking at photos and remembering things that happened in the past is a pastime many people enjoy, and rely on for record keeping. There are some people who rely on images to remember funerals as well. During a time of intense grief and shock following a loss, it's not uncommon to forget the events of a funeral, or remember them incorrectly. Photo and video records can help keep the memory of this event alive.


However, there are many families who would not want to remember a funeral. Taking photos should be left up to the family or individuals planning the funeral. 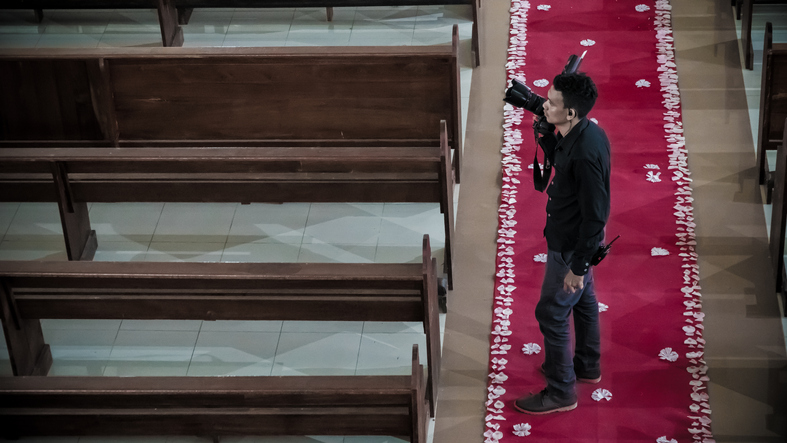 
A designated photographer should handle any funeral photos. Unless the family asks guests to take photos, a single photographer is the best choice to capture the day. If there is a photographer, the last thing the family will want is funeral images of guests taking photos with their smartphones.


While there are circumstances that would be appropriate to take funeral photos, it's generally best to steer clear of your phone entirely during a funeral. A memorial service is a time to focus on the life and accomplishments of the deceased person; to grieve and support others through bereavement.

The Results Are In: 65% of Americans Want an Obituary When They Die — Why Don't They Get One?

From budget constraints to difficulty writing, there are obstacles to writing an obituary

Creating a unique urn in honor of one who has passed away
See all
Your loved one had a remarkable life. Tell their story, and we’ll publish it online for free.