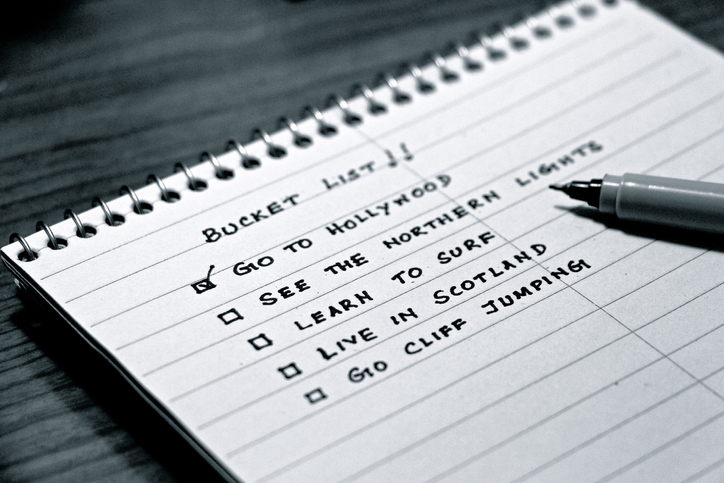 A bucket list is a set of life goals to accomplish before death. What are your goals? (Getty Images)


Popularized by the 2007 film The Bucket List, a bucket list is a set of goals that a person wants to accomplish before they die. A bucket list goal can be anything: any experience, achievement, or milestone is valid when it comes to devising a list of dreams.


Anyone can make a bucket list if they so desire. By making a bucket list, you are creating a blueprint for achieving a life that is meaningful to you. While some people take their bucket lists seriously and actively work to complete them, others take a more relaxed approach.


A bucket list's purpose is to record and track life dreams, in an effort to live life to the fullest. By identifying and organizing your — sometimes intangible — dreams, actually accomplishing them becomes more of a reality than a fantasy.


What kinds of goals do people put on their bucket lists?


While all bucket lists are personal, there are some goals that many people share. A 2020 study by Beyond the Dash shed some light on the kinds of goals adults living in the United States wanted to accomplish before kicking the bucket.

Travel was the top bucket list goal for all ages across the Northeast, South, West and Midwest regions.


The age cohorts studied roughly fell into Millennials, Gen X-ers and Baby Boomers. While there was a spectrum of bucket list goals across all ages (for example, all ages were enthusiastic to skydive, travel and own a home), there were some noteworthy generational trends.


Millennials' bucket list items were overall experiential and accomplishment-based. Many in this age group said they'd like to have meaningful experiences, like attend a particular concert. Millennials also tended to strongly desire career success. This cohort was also likely to reject the concept of having a bucket list altogether.

"Before I die, I'd like to travel, see Van Gogh's museum, and run for office."


— Millennial Respondent from the South


"In my life, I want to make an important scientific discovery, star in a movie, and grow world renowned cannabis."


— Millennial Respondent from the Northeast


"I'd like to meet all the players on the Kansas City Royals."


— Millennial Respondent from the Midwest


— Millennial Respondent from the West


Generation X-ers tended to be mostly practical in their approach to bucket lists. Many in this cohort rejected the idea of needing a bucket list, and focussed mainly on spending time with, and providing for, family. Another interesting trend was a desire to own luxury items, such as a boat.

"When I die, I want to leave a gift to my nephew."


— Gen X Respondent from the South


"To make sure my children don't have anything to worry about."


— Gen X Respondent from the Northeast


— Gen X Respondent from the Midwest


"I just like to live in the moment. I wish I could do all kinds of things before I go, but truth is probably won't get to all of it."


— Gen X Respondent from the West


Baby boomers' responses reflected later-in-life values. Where the bucket lists of younger respondents reflected anxiety about the future (finding a partner, having children, and being able to achieve professionally), baby boomers were more likely to desire happiness, stability and family.

"I'd like to enjoy myself! Spend quality time with the family before I die."


— Gen X Respondent from the South


"Retire, stay home and do nothing all day."


— Gen X Respondent from the Northeast


— Gen X Respondent from the Midwest


"I've done everything on my bucket list. The rest is just extra."


— Gen X Respondent from the West


A strong 14% of all respondents who participate in the study said they had no bucket list at all. Many of these people indicated that, in addition to not having a bucket list, they were against the concept of a bucket list altogether.


These naysayers had plenty of reasons:


Living life to the fullest


One common rationale was that if you live life to the fullest every day, no bucket list should be necessary. These respondents tended to regard bucket lists as a wistful list of unachievable dreams; something to worry about, rather than relish.


Some said they didn't have much money, and saw that as a barrier to having a bucket list. It's unclear whether these respondents had only lavish bucket list goals in mind, or simply had the notion that a bucket list goal needs to be lofty and expensive. Any goal can be a part of a bucket list, including


Another common line of reasoning was that bucket lists create unnecessary pressure to complete them, and conflict with responsible life priorities. For example, one respondent said: "I don't have a bucket list, because family comes first."


While there were trends in every age group, most people wanted simply to live a happy life, with a little extra of the fine things in life. Bucket lists are not necessary to live a good life, but knowing what's important to accomplish before the end of your time on earth is important to ensuring you live your dash to the fullest.