What Does it Mean to "Pour One Out"? 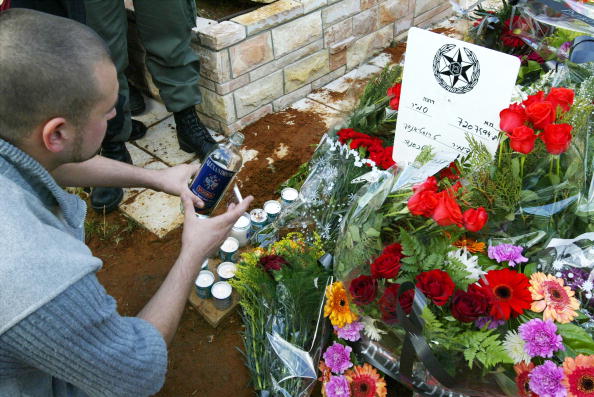 REHOVOT, ISRAEL - JANUARY 15: A friend of Israeli border police officer, Staff Sergeant Vladimir Trostiansky, pours vodka on his grave at the end of his funeral in the military cemetery January 15, 2004 of the central Israeli town of Rehovot. The 22-year-old Russian immigrant was one of four Israelis killed when a female Palestinian suicide bomber blew herself up at Israel's Erez Checkpoint crossing into the Gaza Strip January 14. (Photo by David Silverman/Getty Images)

For the uninitiated, the act of "pouring one out" is exactly as it sounds: A mourner will pour a drink onto the ground as a tribute to one who has passed away. Many modern films, songs and shows reference or portray this ritual, but the practice of pouring one out for the dead is actually an ancient one, dating back thousands of years.


A libation is the ritual pouring of liquid in memory of one who has passed. It wasn't always exclusively alcohol that was poured in honor of the dead. In ancient times, a libation involved the pouring of a liquid or grains onto the ground as a sacrifice to a god, or offering to a spirit, which is how the practice came to include offerings to the dead.


One of the most fascinating things about this historic tradition is that it holds roots in most parts of the world. People practiced libation as far back in history as ancient Egyptian times, when people poured out offerings to the gods and nature. This also occurred in ancient Greece, Rome, China, Japan, the Americas, India and Siberia. It's an oddly specific universal custom, which is why so many modern folks still identify with this ancient practice.


The gesture of pouring out a liquid in honor of the dead is a simple one, and has not changed very much since ancient times, though it has lost much of the ritual surrounding it.


Today, pouring one out generally means the pouring of alcohol or wine. The way it's done varies depending what part of the world you're in. For example, in Russia, people mourning a loss will pour vodka on the grave of the dead person.


In the United States, pouring one of for someone who is dead occurs at private social occasions, including events like funeral receptions where guests may already be imbibing alcohol. This custom has become particularly prevalent in American rap culture. "Tipping to your dead homie" is a way of paying respect to lives lost.


DRS's famous song "Gangsta Lean" explicitly discusses the act of pouring out alcohol as a tribute to "homies in that gangsta lean":


I know one day soon,


There aren't many secular traditions that span history and continents like the custom of pouring one out for a person who has died. This practice transcends religion and presents mourners with a way to express grief in a way that is understandable across cultures. Next time you're thinking of your loved one, consider offering them a little offering from earth by pouring some out in their honor.