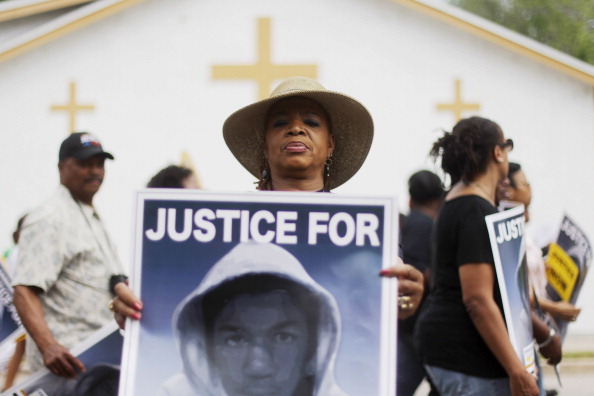 SANFORD, FL - MARCH 31: A Trayvon Martin supporter displays her sign during a march through the historically African American community of Goldsboro on their way to a rally in front of the Sanford Police Department on March 31, 2012 in Sanford, Florida. Martin was killed by George Michael Zimmerman while on neighborhood watch patrol in the gated community of The Retreat at Twin Lakes. Rev. Jesse Jackson, Rev. Al Sharpton and NAACP President Benjamin Jealous were amongst the supporters demanding Zimmerman's arrest. (Photo by Mario Tama/Getty Images)

When someone passes away, it is customary to offer condolences and words of comfort to the grieving family. One of the most common condolences can be found in obituaries, sympathy cards, eulogies, and graveyards, old and new: RIP. But today, RIP can mean more than "Rest In Peace."


For some deaths, this abbreviation actually stands in for 'Rest In Power'. This alternate usage is related to racial inequality, and disproportionate violence against people of color — particularly African-Americans.


'Rest In Power' is a new take on an ancient death sentiment. It is used to pay tribute to young victims of violence, in response to the Black Lives Matter movement.


RIP is the abbreviated form of both 'Rest In Peace' and the originating Latin phrase Requiescat in pace. The meaning is simple: to wish the deceased soul a peaceful existence after death. It's a traditionally Christian sentiment, but is used culturally and colloquially to express remorse for a loss. The earliest use of this phrase was around the 8th century.


'Rest In Power' is a recent re-envisioning of the old phrase. It's thought that the phrase first began in "the graffiti community of Oakland, California," in the early to mid-2000s. It became more mainstream on Twitter, particularly after the founding of the Black Lives Matter movement.


'Rest In Power' is said in response to an unjust death to bring attention to a need for change. This phrase is pro-Black Power and most often used in cases of unarmed black citizens unjustly killed by law enforcement, or as a casualty of violent racism. Using 'Rest In Power' instead of 'Rest In Peace' implies that the soul of the deceased cannot truly rest in peace until society addresses the inequalities that led to the death.


The phrase 'Rest In Power' is closely linked to the tragic winter 2012 killing of Trayvon Martin. While his death is not the sole catalyst for the phrase, it is considered a factor in making 'Rest in Power' a more mainstream condolence in activism.


Trayvon Martin was just 17 when he was gunned down by George Zimmerman, a volunteer member of the Neighborhood Watch. Zimmerman reported the teenager to police for looking "suspicious" before confronting, and ultimately shooting, Trayvon Martin. Trayvon was famously unarmed at the time of his death, carrying only Skittles and iced tea he had bought at 7-11.


Zimmerman was ultimately acquitted of the crime due to Florida's 'stand-your-ground- law', which allows lethal force in cases of self-defence, even if de-escalation is possible via retreating.


This tragedy was one of many that bolstered the Black Lives Matter movement in the next two years. When a death of an unarmed black citizen occurs, the phrase 'Rest In Power' may be used to reinforce the need for social change. It's a prayer for the deceased that doubles as a call to action after a senseless death. In 2017, Trayvon's parents released Rest in Power: The Enduring Life of Trayvon Martin, a biography of the teen who lost his life too soon.


A call for justice


The killing of Breonna Taylor during a nighttime police raid while she slept and the death of George Floyd during an arrest by the Minneapolis Police again renewed calls for racial justice in 2020. 'Rest In Power' was a powerful sentiment shared widely by mourners and activists alike during the Black Lives Matter protests that followed.


The September 2020 death of Supreme Court Justice Ruth Bader Ginsburg prompted another outpouring of grief, with several outlets using the phrase 'Rest In Power' to pay tribute to the "legal trailblazer, cultural icon and champion of women's rights."


Should I say 'Rest in Power' when a loved one dies?


More recently, the phrase has occasionally been used to commemorate figures who are unrelated to civil rights causes like Black Lives Matter. Though there are no firm rules about mourning, it is generally understood to be inconsiderate to use 'Rest In Power' for a death that did not result from an injustice, like racism, sexism, homophobia, corruption or a murder.


Use discretion before using this phrase as a condolence, keeping in mind the circumstances of the death.

An honored ceremonial funeral role that ensures dignity to those who have passed
See all
Your loved one had a remarkable life. Tell their story, and we’ll publish it online for free.