Fantasy Coffins: The Ghanaian Tradition of Burying the Dead in Style 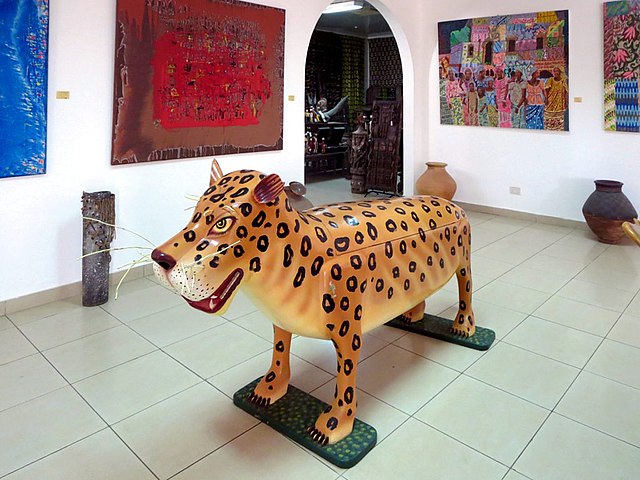 Paintings vie with a fantasy coffin resembling a lion for display space at the Artists Alliance Gallery at Labadi in Accra, Ghana.(Lion Coffin/Wikimedia Commons)

How do you want your body to be handled, when you die? In North America, the two mainstream options are burial and cremation. When it comes to burial, many opt for a plain wood or metal rectangular box, because that's what funeral homes offer. But in Ghana, burial boxes don't follow the staid, Victorian-influenced conventions of the west.


Coffins have undergone a major transformation in the last century. What used to be an elongated hexagonal, handcrafted wooden funerary box is now a plain rectangle, mass produced in all variety of non decomposable materials, including bronze, copper, and stainless steel. Even the name coffin has gone out of vogue to be replaced with the considerably less death-reminiscent term, casket.


North American death care has become increasingly sterile and mysterious. But keeping death at arm's length isn't the preference in many other parts of the world.


In Ghana, caskets are still called coffins. They're also works of exquisite art, designed with a sense of fun to reflect the deceased person's character in their vessel of final disposition.


Fantasy coffins, also known as figurative coffins, are constructed by Ghanaian builders who specialize in this sacred craft. They are made to order in Ghana, and shipped around the world. While a single coffin can take a month or more to perfect, multiple carpenters will occasionally team up to complete a rush order, working simultaneously on the same piece. 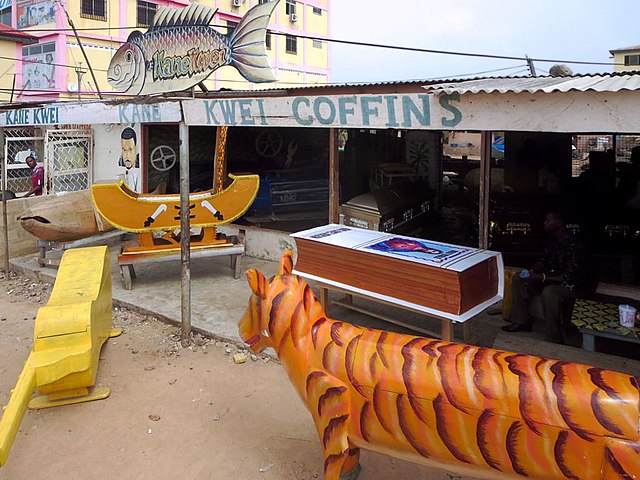 Ghanain coffin makers have cornered the world's fantasy coffin market, but that doesn't mean you can't have a fantasy coffin of your own. They are custom made and shipped around the world for families who want to give a recently deceased loved one a memorable final send-off. The final shape is thoughtfully chosen by the family in mourning as a last gift of prestige and honor to the person who has passed away.


The reasons for creating unique containers for the dead are related to the Ga community's beliefs in an afterlife. After death, a person's life continues in the next world much the same as it did on earth. The coffin represents the occupation or interests of the deceased person in life; for example, a sailor might be buried in a boat-shaped fantasy coffin. By burying the dead in a vessel that connects them with their life's work, they secure their occupation of choice in the next life. There is also an element of exuberance and extravagance at Ghanain funerals, with families sometimes spending up to a year's worth of pay on a loved one's full funeral ceremony.


The custom-built coffins are not viewed by the public until the funeral ceremony. At that time, a fantasy coffin will be unveiled for all to see.


Ghanaian coffin makers are master craftsmen who build funerary boxes that embrace the vibrancy of life. The larger-than-life coffins can take the shape of anything the heart desires. These practical sculptures have taken countless shapes, and usually include bold, colorful and fun designs.


Here are some stunning examples of Ghanaian fantasy coffins that have been used to lay the dead to rest.

Celebrating the vibrancy of life, in death


There's no doubt that these unique funerary boxes can help create a more imaginative and inspiring funeral. Death is personal, and these fantasy coffins can be as vibrant, silly, quirky or unique as the person who is gone. 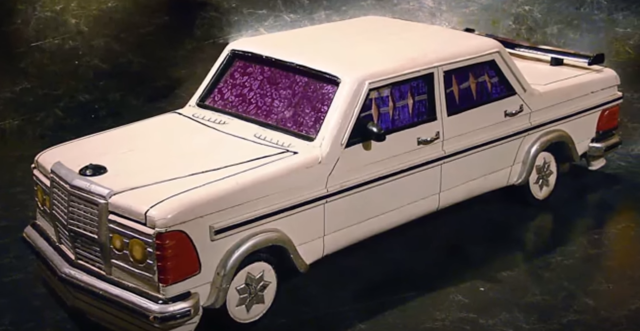 What shape would your fantasy coffin take? Let us know in the comments!