Cultural spotlight: Day of the Dead 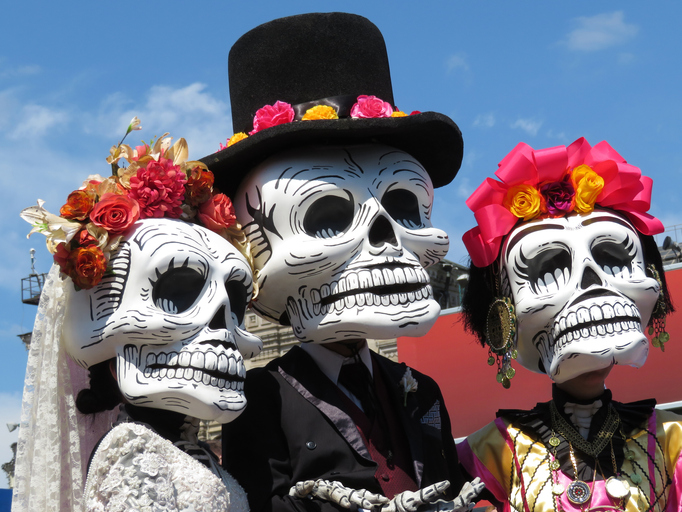 Perhaps one of the most visible Mexican cultural traditions, Día de Muertos, or Day of the Dead, is a Mexican holiday that unites the living with the dead. Both Catholic values and pre-Hispanic traditions tie into this celebration of life, through engaging deeply with death.


Day of the Dead


Día de Muertos takes place annually from October 31 to November 2. It's an ancient tradition that honors the lives and deaths of ancestors who have passed away. Carried forth internationally by folks of Mexican descent, it's the one time of year that the living are able to visit with family members who have completed their lives. Day of the Dead celebrations also take place each year in most large North American cities.


The Day of the Dead is celebrated in the first two days of November, but begins in the evening of October 31—All Hallows Eve. This is when the festivities begin!


There is a common misconception that "Day of the Dead" amounts to a "Mexican Halloween." The overlapping dates, presence of vibrant costumes and awakening of the dead contribute to this over-simplification. But Día de Muertos is a cultural celebration with deep spiritual meaning that crosses generations and the divide between alive and dead.


All Saints Day, also known as Día de los Inocentes or Día de los Angelitos, commemorates dead children and infants. Spirits visit for 24 hours starting at the stroke of midnight on the first of November.


Mexican children are usually socialized to understand death from an early age. They are not shielded from grief or funeral ritual. Because of this, Mexican folks tend to embrace rituals surrounding death more readily than in the rest of North America.


All Souls' Day is is the true Day of the Dead celebration, when the souls of adults also return to the earth to visit. Again beginning at midnight, this evening is more focused on memorializing relatives who have passed away, by reminiscing, playing games, and dancing.


At noon on November 2, public celebrations are held. Parades, music, dancing, gifts, food and drink happen in most communities. People dress up in traditional Día de Muertos garb, often as Catrina, a female skeleton who wears a large, ornate hat.


Families will tend the graves of their ancestors and write the names of deceased relatives on sugar skulls. 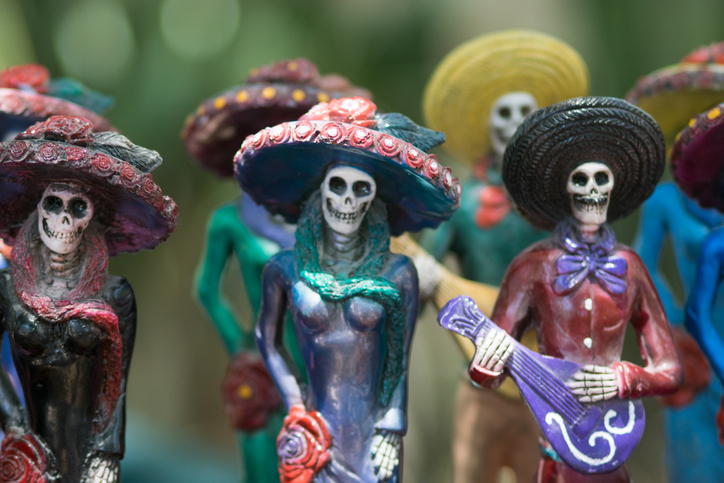 In Mexico, graves are tended by families. Trips to the gravesite are a regular ritual that can include all family members, including children.


Visiting the graves of loved ones to clean, tend and decorate is a big part of the Day of the Dead celebration. Returning to the place where the remains of the deceased rest is an opportunity to pay respects, and ensure that location reflects the reverence and love of the family. Candles, toys, flowers and belongings of the deceased are placed at the gravesite to welcome the spirits of the dead and set them more at ease during their earthly visit.

Ofrendas are altars of offerings for the dead. Often, these are prepared in the cemeteries where deceased relatives are buried, but families may also build these shrines in the home. Flowers, specifically Marigolds, adorn graves, clothing and altars as this flower facilitate the journey of spirits to the earth.


Food, alcohol, photos, toys, decorations, belongings of the deceased, bedding and other religious objects make up the altar to invite spirits, welcome them and make them feel comfortable during their time back on earth.

Food welcomes spirits of deceased loved ones to the home on Day of the Dead. Sweets like candied pumpkin, and sugar skulls (edible candy skulls known as calaveras) tempt the spirits of children, and alcohol like tequila and mezcal tempt the spirits of adults. Offerings of tamales and pan de muerto (bread of the dead) are other traditional Día de Muertos foods that spirits find tasty.

Skulls that laugh and smile take shape as decorations, makeup and candy. Calveras perfectly blend the somber occasion with the celebratory demeanor of Día de Muertos.

Perhaps the most distinctive aspect of Día de Muertos is the attire. Skulls, flowers, long dresses, vibrant colors and makeup make this festival fun. It's a celebration! To be reunited with loved ones who have completed their lives is an honor and a time to be joyful.


It's important to recognize that it is not appropriate to wear Día de Muertos attire as a Halloween costume. Mimicking cultural attire, identity or symbols that are not your own disregards and diminishes the history and context of those cultures. It is disrespectful to 'try on' another cultural identity, as in cases of those who have donned blackface, Indigenous headdresses or sugar skulls as costumes. Though Day of the Dead is celebratory and fun, the cultural attire is a spiritual ritual for the dead, and as such is still a respectful occasion. 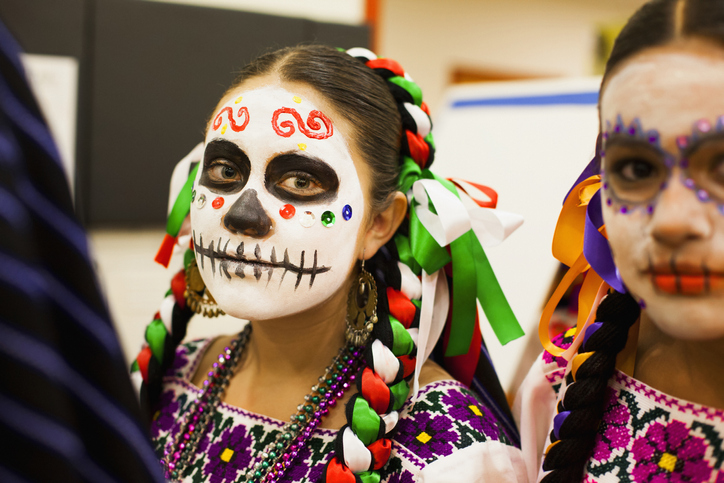 A counter to death aversion


Western society is predominately death-averse. Outside of communities that celebrate mortality and the inevitability of death (like Order of the Good Death), there is little room to explore the end-of-life-experience, and continue relationships with relatives who have passed.


One of the most bizarre and painful aspects of grief is that the living survivors do continue to evolve in their relationships with the dead. Death is final, but emotional bonds don't die so quickly. This one-sided relationship is confusing, unfulfilling and largely misunderstood by society.


Mexican traditions routinely diverge from the staunch western approach to death. In doing so, people can be more connected to their family history and mortality.